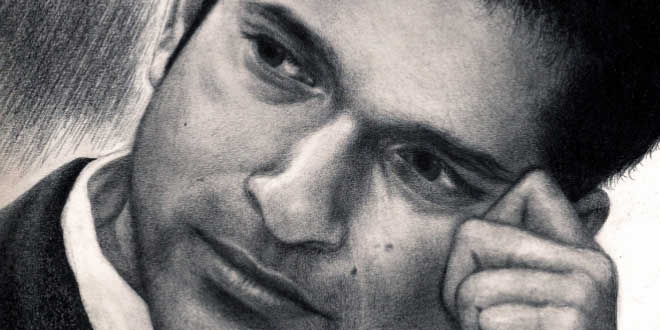 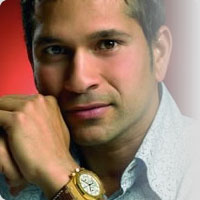 Sachin Tendulkar — Sachin Ramesh Tendulkar (born 24 April 1973) is an Indian cricketer. He holds several batting records, including the most Test centuries and the most one-day international centuries, and was rated in 2002 by Wisden as the second greatest Test batsman ever, after Sir Don Bradman.

Tendulkar is the first player to score fifty centuries in all international cricket combined, he now has 93 centuries in international cricket. On 17 October 2008, when he surpassed Brian Lara’s record for the most runs scored in Test Cricket, he also became the first batsman to score 12,000 runs in that form of the game, having also been the third batsman and first Indian to pass 11,000 runs in Test cricket. He was also the first player to score 10,000 runs in one-day internationals, and also the first player to cross every subsequent 1000-run mark that has been crossed in ODI cricket history and 200 runs in a one-day international match. In the fourth Test of the Border-Gavaskar Trophy against Australia, Tendulkar surpassed Australia’s Allan Border to become the player to cross the 50-run mark the most number of times in Test cricket history, and also the second ever player to score 10 Test centuries against Australia, after only Sir Jack Hobbs of England more than 70 years previously. Tendulkar passed 30,000 runs in international cricket on 20 November 2009, and has been honoured with the Padma Vibhushan award, India’s second highest civilian award, and the Rajiv Gandhi Khel Ratna award, India’s highest sporting honour.

Born in Mumbai (then Bombay) into a middle-class family, Sachin Tendulkar was named after his family’s favorite music director Sachin Dev Burman. He went to Sharadashram Vidyamandir School where he started his cricketing career under coach Ramakant Achrekar. While at school, he was involved in a mammoth 664 run partnership in a Harris Shield game with friend and team mate Vinod Kambli. In 1988/1989, he scored 100 not-out in his first first-class match, for Bombay against Gujarat. At 15 years and 232 days he was the youngest to score a century on debut. 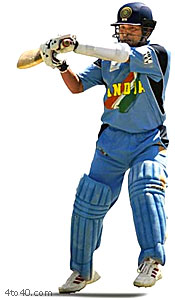 Sachin played his first international match against Pakistan in Karachi in 1989, facing the likes of Wasim Akram, Imran Khan, Abdul Qadir and Waqar Younis. He made just 15 runs, being bowled by Waqar Younis, who also made his debut in that match. It was an inauspicious start, but Tendulkar followed it up with his maiden Test fifty a few days later at Faisalabad. His One-day International (ODI) debut on December 18 was equally disappointing, where he was dismissed without scoring a run, again by Waqar Younis. The series was followed by a non-descript tour of New Zealand in which he fell for 88 in a Test match, John Wright, who would later coach India, pouching the catch that prevented Tendulkar from becoming the youngest centurion in Test cricket. The long anticipated maiden Test century came in England’s tour in 1990 but the other scores were not remarkable. Tendulkar truly came into his own in the 1991-1992 tour of Australia that included a brilliant century on the fast and bouncy track at Perth. He has been Man of the Match 11 times in Test matches and Man of the Series twice, both times in the Border-Gavaskar Trophy against Australia.

Highlights of Tendulkar’s Test career include:

Highlights of Tendulkar’s ODI career include:

The case against Sachin Tendulkar’s recent performances was summed up by Wisden Cricketers’ Almanack in its 2005 edition: “Apart from a glorious, nothing-to-lose 55 against Australia on a Mumbai terrortrack, watching Tendulkar became a colder experience: after his humbling 2003, he seemed to reject his bewitching fusion of majesty and human frailty in favour of a mechanical, robotic accumulation.”

The criticism must be seen against the backdrop of Tendulkar’s performance through the years 1994-1999, coinciding with his physical peak, at age 20 through 25. Tendulkar was told to open the batting at Auckland against New Zealand in 1994. He went on to make 82 runs off 49 balls. This was the beginning of a glorious period, culminating in the Australian tour of 1998-1999, following which Australian spinner Shane Warne ruefully joked that he was having nightmares about his Indian nemesis. 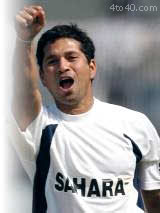 A chronic back problem flared up when Pakistan toured India in 1999, with India losing the historic Test at Chepauk despite a gritty century from Tendulkar himself. Worse was to come as Professor Ramesh Tendulkar, Sachin’s father, died in the middle of the 1999 cricket World Cup. Tendulkar, succeeding Mohammad Azharuddin as captain, then led India on a tour of Australia, where the visitors were comprehensively beaten 3-0 by the newly-crowned world champions. Tendulkar resigned, and Sourav Ganguly took over as captain in 2000.

Tendulkar made 673 runs in 11 matches in the 2003 World Cup, helping India reach the finals. While Australia retained the trophy that it had won in 1999, Tendulkar was given the Man of the Series award.

The drawn series as India toured Australia in 2003-2004 saw Tendulkar making his mark in the last Test of the series, with a double century in Sydney. The series was tied 1-1, with Rahul Dravid taking the Man of the Series award.

Tennis elbow then took its toll on Tendulkar, leaving him out of the side for the first two Tests when Australia toured India in 2005. He played a part in the face saving Indian victory in Mumbai, though Australia had already taken the series 2-1, with the Chennai Test drawn.

Of late, as Wisden noted, Tendulkar has not been his old aggressive self. Expert opinion is divided on whether this is due to his increasing years or the lingering after-effects of injuries over 17 years at the highest level. On 10 December, 2005, at Feroz Shah Kotla, he delighted fans with a record-breaking 35th Test century, against the Sri Lankans. But doubts were raised once again when he averaged a mere 21 over three Test innings when India toured Pakistan in 2006.

On 6 February 2006, Tendulkar scored his 39th ODI hundred, in a match against Pakistan. Tendulkar now has 16 more ODI tons than the man who is second on the list of ODI century-makers, Sourav Ganguly. He followed with a run-a-ball 42 in the second ODI against Pakistan on February 11, 2006, and then a truly masterly 95 in hostile conditions on 13 February, 2006 in Lahore.

On 19 March 2006, after scoring an unconvincing 1 off 21 balls against England in the first innings of the third Test in his home ground, Wankhede, Tendulkar was booed off the ground by a section of the crowd, the first time that he has ever faced such flak. While cheered on when he came for his second innings, Tendulkar was to end the three-Test series without a single half-century to his credit, and news of a shoulder operation raised more questions about his longevity. Geoffrey Boycott was brutal in his assessment: “Sachin Tendulkar is in the worst form of his career… Now that he’s going to sit out for a further two months, I don’t think he can ever come back to regain what he once had.”

Sachin Tendulkar is the most prolific run scorer in one-day internationals with 17,598 runs. With a current aggregate of 13447 Test runs, he surpassed Brian Lara’s previous record tally of 11,953 runs as the highest run scorer in test matches in the second Test of Australia’s 2008 tour of India in Mohali. Tendulkar described “It is definitely the biggest achievement in 19 years of my career” on the day he achieved the record. He also holds the record of highest number of centuries in both Test (47) and ODI cricket (46). Throughout his career, he has made a strong impact on Indian cricket and was, at one time, the foundation of most of the team’s victories. In recognition with his impact on sport in a cricket-loving country like India, Tendulkar has been granted the Rajiv Gandhi Khel Ratna, Arjuna Award, Padma Shri and Padma Vibhushan by the Government of India. He was also chosen as one of the five Wisden Cricketers of the Year in 1997 and is ranked by the Wisden 100 as the second best test batsman and best ODI batsman of all time.

Tendulkar has also consistently done well in Cricket World Cups. Tendulkar was the highest run scorer of the 2003 Cricket World Cup and 1996 Cricket World Cup. Tendulkar has scored over 1000 runs in a calendar year in ODIs 7 times, and in 1998 he scored 1894 runs, easily the record for the highest number of runs scored by any player in a single calendar year for one day internationals. Tendulkar is also one of the very few players who are still playing in international cricket from the 1980s. On 24 February 2010, Tendulkar broke the previous world record for highest individual run scorer in an ODI and became the first male cricketer to score double century in ODI. He scored 200 runs and broke the previous record of 194 runs jointly held by Pakistan opener Saeed Anwar and Zimbabwe’s Charles Coventry.

Sachin Tendulkar married Anjali Mehta, the pediatrician daughter of Gujarati industrialist Anand Mehta, in 1995, some years after they were introduced by mutual friends. They have two children, Sara (born October 1997) and Arjun (born 23 September, 2000). Tendulkar sponsors 200 under-privileged children every year through Apnalaya, a Mumbai-based NGO associated with his mother-in-law, Annabel Mehta. He is reluctant to speak about this, or other charitable activities, choosing to preserve the sanctity of his personal life despite the overwhelming media interest in him. Tendulkar has been seen taking his Ferrari 360 Modena for late-night drives in Mumbai. (Gifted by Fiat through Michael Schumacher, the car became notorious when Tendulkar was given customs exemption; Fiat paid the dues to end the controversy.)