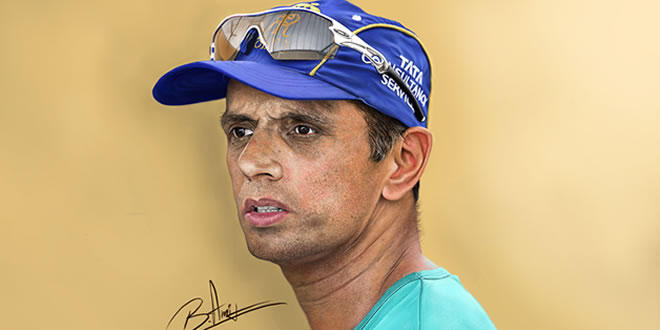 Rahul Dravid — Rahul Sharad Dravid has established himself as an integral part of the Indian National Cricket team with his technical proficiency, stylish strokes and sheer stability.

Rahul was born on January 11, 1973 in Indore, Madhya Pradesh, to parents Sharad Dravid and Pushpa. He started to play cricket at the age of 12. Dravid did well in the junior tournaments to merit selection in the State under-15, under-17 and under-19 tournaments. Meanwhile he finished his bachelors from St. Joseph’s College of Commerce.

He made his debut in the Ranji Trophy match against Maharashtra at Pune in 1990-91. He was the youngest Karnataka player to score a maiden century in Ranji. In 1995-96 he broke into the international team. He made his debut in One Day Internationals against Sri Lanka at Singapore in 1996. He is one player who has always shown stability and concentration and delivered solid performances in all the games that he played. Dravid was the highest scorer in the 1999 World Cup, when he along with Sourav Ganguly created a new World record for the highest partnership of 318 runs for any wicket. Rahul’s abilities are not confined to batting alone. He bowls right-arm off breaks and now is a good reserve wicket keeper also.

Rahul keeps his cool even in a crisis and thus is a reliable anchor for the Indian team. Since he started playing he has maintained a Test career average of over 50. Technically his batting is flawless and he has improved with experience especially in Test Cricket.

Dravid has been honored with the Arjuna Award by the President of India. Rahul Dravid was the 12th Indian to be named one of Wisden’s five Cricketers of the Year for the year 2000 after his splendid performance in the 1999 World Cup in England. This talented player with his scores remains a pride to the Indian team

Rahul Sharad Dravid (born 11 January 1973 in Indore, Madhya Pradesh) is an Indian cricketer, and the current captain of the Indian cricket team. He grew up in Bangalore, Karnataka. Though dropped from the one-day team earlier in his career for scoring relatively slowly, he is, at present, ranked the 7th best Test batsmen by the ICC in world cricket at the moment, and has the highest Test batting average of any Indian batsman in history. He started his international cricket career in 1996.

Born in Indore, Dravid’s family relocated to Bangalore, Karnataka, where his father worked for Kissan, a company known for jams and preserves. This lead to him earning the nickname Jammy from his teammates at St. Joseph’s, Bangalore. Dravid first came to prominence whilst attending a summer coaching camp at the Chinnaswamy Stadium where his talents were spotted by former cricketer Keki Tarapore who was coaching at the clinic. He went on to score a century on debut for his school team and was selected for the U-15 Karnataka cricket team, scoring a double century against the U-15 Kerala cricket team [citation needed]. Along with the batting, he was keeping wickets. However, he later stopped keeping wickets on advice from former Test players Gundappa Vishwanath, Roger Binny, Brijesh Patel and Tarapore. He was selected to make his Ranji Trophy in February 1991 against Maharashtra in Pune (while still attending college at St. Joseph’s College of Commerce in Bangalore), alongside future Indian teammates Anil Kumble and Javagal Srinath, scoring 82 in a drawn match after batting in the No. 7 position. his first full season was in 1991-92, when he scored two centuries to finish with 380 runs at an average of 63.3, and was selected for South Zone in the Duleep Trophy, for whom he has been subsequently chosen annually. He had a stronger season in 1992-93, scoring 582 runs at an average of 83.1 including a double century but managed only one game in the Duleep Trophy, scoring 14. In the following year, he had another strong Ranji Trophy scoring 644 runs at an average of 80.5 including two centuries but again had a disappointing Duleep Trophy campaign, averaging just 13. However, in the 1994-95 season, Dravid played only once in the Ranji competition, but he scored 191 in his only innings and averaged 52 in the Duleep Trophy. In the 1995-96 Ranji Trophy season, he scored 153 as captain against Hyderabad in the semi-final to advance to the final, in which he scored another century against Tamil Nadu. In total he scored 460 runs at an average of 57.50 and was the second highest run-scorer in the Duleep Trophy behind V. V. S. Laxman as well as topping the averages. Dravid became a contender for International duties after being selected for the India A team in a domestic tournament in the 1994-95 season and again in the 1995-96 season, where he top-scored for his team in the match against India B and the final against the senior Indian team. However, he was overlooked from the Indian team for the 1996 Cricket World Cup held on the Indian subcontinent.

Dravid made his international debut in one-dayers against Sri Lankan cricket team in the Singer Cup in the Singers ground in Singapore immediately after the World Cup in March 1996, replacing Vinod Kambli. After scoring just 21 runs in four matches, Dravid was dropped during the Sharjah tournament and did not play again until Sanjay Manjrekar was injured on the tour of England.

With Manjrekar sidelined, he then made his debut in the Second Test against England along with Sourav Ganguly, scoring 95. He held his position on Manjrekar’s return for the Third Test, scoring 84. After moderate home series against Australia and South Africa, Dravid broke through on the 1996-97 tour of South Africa. He batted at No. 3 in the third Test in Johannesburg, scoring his maiden century with 148 and 81, the top score in each innings to claim his first man of the match award. He also finally made his first half-century against Pakistan in the Sahara Cup in 1996, scoring 90 in his 10th ODI.

In the 18 months ending in mid-1998, he played in an away series against the West Indies, home and away series against Sri Lanka and a home series against Australia, he scored consistently, with 964 runs at an average of 56.7. He scored eleven half-centuries but was unable to convert them to triple figures. He scored his second century in late 1998 against Zimbabwe in a one-off Test match, top-scoring in both innings with 148 and 44, but was unable to prevent an Indian defeat. He then became the third Indian batsman after Vijay Hazare and Sunil Gavaskar to score centuries in both innings of a match during the 1999 New Year’s Test match against New Zealand with 190 and 103* to force a draw, batting for a total of 653 minutes. He had a moderate sub continental season in early 1999, scoring 269 runs at 38.42 with one century before scoring 239 at 39.8 including a century against New Zealand in late 1999. This was followed by a poor away series against Australia and another poor home series against South Africa, accumulating just 187 runs at an average of 18.7. He then scored 200*, his first double century, against Zimbabwe in Delhi which along with 70* in the second innings helped India to victory. It was the first time he had passed 50 in 12 months and he followed this with a 162 in the following Test, giving him 432 runs in the two match series at an average of 432.

With a strong technique, he has been the backbone for the Indian cricket team. Beginning with the reputation of being a defensive batsman who should be confined to Test cricket, he was dropped from ODIs as he was slow in making runs. Of late, however, Rahul Dravid has defied early perceptions to become the mainstay of the Indian batting line-up in ODIs [citation needed] as well as in Tests. His nickname of ‘the Wall’ in Reebok advertisements has now become a tribute to his consistency. Dravid has scored 23 centuries in Test cricket at an average of 58.75, including 5 double centuries. In one-dayers though he has an average of 40.05, he is a slow scorer at a strike rate of 70.70. He is one of the few Indians who average more at away matches than at home, averaging over 10 more runs a match abroad than on Indian pitches. As of 9 August, 2006, Dravid’s average in overseas Tests stood at 65.28 as against his overall Test average of 58.75, and his average for away ODI stands at 42.03 as against overall ODI average of 40.05. In matches that India has won, Dravid averages 78.72 in Tests and 53.40 in ODIs.

Dravid’s sole Test wicket was that of Ridley Jacobs in the fourth Test against the West Indies during the 2001-2002 series. While he has no pretensions to being a bowler, Dravid often kept wicket for India in ODIs, an ‘experiment’ that continued for several seasons. He has since delegated the wicket-keeping gloves, first to Parthiv Patel and more recently to Mahendra Singh Dhoni. Dravid is now purely a batsman, one who has averaged 63.51 in matches played since 1 January, 2000.

Dravid was involved in two of the largest partnerships in ODIs: a 318-run partnership with Sourav Ganguly, the first pair to combine for a 300-run partnership, and then a 331-run partnership with Sachin Tendulkar, which is the present world record. He also holds the record for the greatest number of innings since debut before being dismissed for a duck. His highest scores in ODIs and Tests are 153 and 270 respectively. Uniquely, each of his five double centuries in Tests was a higher score than his previous double century (200*, 217, 222, 233, 270).

Also, Dravid is the current world record holder for the highest percentage contribution of runs scored in matches won under a single captain, where the captain has won more than 20 Tests. In the 21 Test matches India won under Sourav Ganguly’s leadership, Dravid played his part in every single one of those wins, scoring at a record average of 102.84 and piling up an astonishing 2571 runs, with nine hundreds – three of them double-centuries – and ten fifties in 32 innings. He contributed nearly 23% of the total runs scored by India those 21 matches, which is almost one run out of every four runs the team scored.

Rahul Dravid’s career performance graph. He was named one of the Wisden cricketers of the year 2000.

In 2004, Dravid was awarded the Padma Shri by the Government of India. On 7 September, 2004, he was awarded the inaugural Player of the year award and the Test player of the year by the International Cricket Council, ICC (associated image below). Dravid’s batting average of 95.46 in the past year has made him the only Indian to be in the Test team of the year. On 18th March, 2006, Dravid played his 100th Test against England in Mumbai.

In 2005, a biography of Rahul Dravid written by Devendra Prabhudesai was published, ‘the Nice Guy Who Finished First’.

In the 2005 ICC Awards he was the only Indian to be named to the World one-day XI.

In 2006, it was announced that he would remain captain of the Indian team up to the 2007 World Cup in the West Indies.

Rahul Dravid married Vijeta Pendharkar, a surgeon from Nagpur, on Sunday, 4 May, 2003; their son, Samit Rahul Dravid, was born on 11 October, 2005.