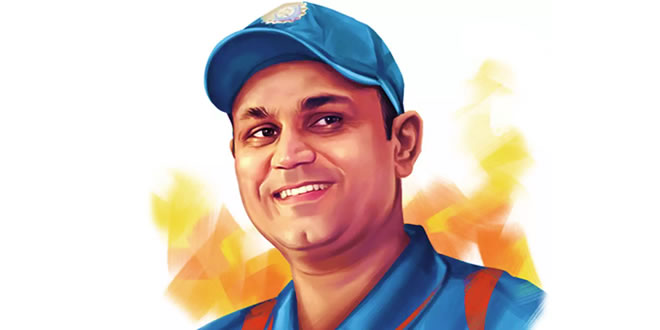 Virender Sehwag (born 20 October 1978), affectionately known as Viru, the Nawab of Najafgarh (New Delhi), or the Zen master of modern cricket, is one of the leading batsmen in the Indian cricket team. Sehwag is an aggressive right-handed opening batsman and a part-time right-arm off-spin bowler. He played his first One Day International in 1999 and joined the Indian Test cricket team in 2001. In April 2009, Sehwag became the only Indian to be honored as the Wisden Leading Cricketer in the World for his performance in 2008, subsequently becoming the first player of any nationality to retain the award for 2009.

Sehwag holds multiple records including the highest score made by an Indian in Test cricket (319), which was also the fastest triple century in the history of international cricket (reached 300 off only 278 balls) as well as the fastest 250 by any batsman (in 207 balls against Sri Lanka on 3 December 2009 at the Brabourne stadium in Mumbai). Sehwag also holds the distinction of being one of four batsmen in the world to have ever surpassed 300 twice in Test cricket, and the only one to score two triple centuries and take a five-wicket innings haul. In March 2009, Sehwag smashed the fastest century ever scored by an Indian in ODI cricket, from 60 balls.

Sehwag was appointed as vice-captain of the Indian team under Rahul Dravid in October 2005 but due to poor form, he was later replaced by V. V. S. Laxman in December 2006 as Test vice-captain. In January 2007, Sehwag was dropped from the ODI team and later from the Test team as well. During his term as vice-captain, Sehwag skippered the team in place of injured Dravid in 2 ODIs and 1 Test. Following his return to form in 2008 and the retirement of Anil Kumble, Sehwag has been reappointed as the vice-captain for both Tests and ODIs. By early 2009, Sehwag had re-established himself as one of the best performing batsmen in ODI cricket.

It took a while for Virender Sehwag to come out of his shell. But when he finally shelved his fearful nature and broke loose, without caring of consequences, he steadily established himself as one of the most dangerous batsman in world cricket.

One can probably sight the Tri-series in Sri Lanka in 2001, involving India and New Zealand, as the tournament which saw Sehwag’s transition. Tendulkar-less, the Indian top order was trying in vain to find an opening partner for Sourav Ganguly. After various failed experiments, then lower-order all-rounder ‘Viru’, as his team-mates fondly call him, was promoted to walk the turf alongside the elegant left-hander. A century of 97 balls in a mammoth opening stance during a do-or-die match against New Zealand, helped India book an unlikely finals spot after losing its opening three encounters in the tournament. It also changed his role in the side, from a bowling all-rounder to an opener cum part-time spinner. After a spree of fifties later in the year, Sehwag earned his maiden Test cap against South Africa. Playing again in the lower-middle order, he scored a century on debut. Failure of Shiv Sunder Das, Deep Das Gupta and Wasim Jaffar to solve India’s opening woes allowed Sehwag to make the Test opening slot his, against England in 2002. Again, a century in relatively quick time ensued, and inevitable comparisons began to be drawn with Sachin Tendulkar. But with time Sehwag would go on to carve his own niche.

With a well-advanced back-lift set to hammer the oncoming delivery with minimalist footwork, Sehwag’s frugal run acquisitions would make him arguably India’s most feared batsman. It also helped him set various strike rate-related records, aside from being India’s first ever batsman to score a triple hundred in Tests. After Rahul Dravid replaced Sourav Ganguly as Indian skipper, Sehwag’s consistency over time was rewarded with a vice-captaincy appointment. But a poor World Cup for the duo, owing in part to Sehwag’s dip in form, would see him dropped and VVS Laxman being handed the deputy role. The Haryanvi would return to re-establish his credentials, and form successful opening pairs with Sachin Tendulkar and Delhi teammate Gautam Gambhir. Both partnerships helped India in its journey to becoming one of the most dominant teams in world cricket.

Record books were forever updated as centuries kept on coming. Two years upon his return, Wisden recognized him twice in succession with their best honours. He would also change the tide for Indian batsmen, often considered technically astute and cultured, but never one to dismantle bowling attacks. As the game transitions into being a more entertaining medium being played at a faster pace, Sehwag would certainly go down in history as one of the catalysts who actuated the same.