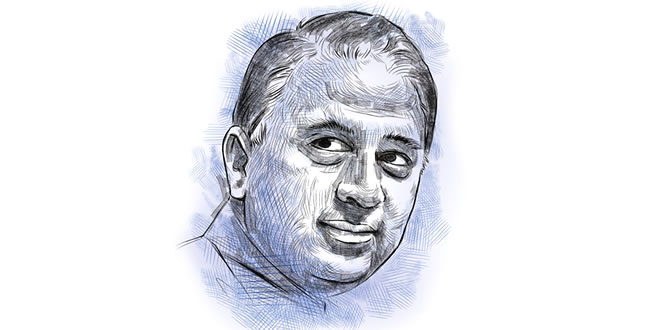 Sunil Gavaskar — Sunil Manohar Gavaskar (born July 10, 1949 at Bombay, Maharashtra), nicknamed Sunny, was a cricket player during the 1970s and 1980s for Bombay and India. He is arguably the the greatest opening batsmen in the Test cricket. His Home town (native place) is Ubhadanda-Vengurla.

He made a spectacular Test debut in 1971 scoring 774 runs in his first Test series against the West Indies helping India to become one of the few teams to defeat the West Indies at home in the Caribbean. Gavaskar went on to average a mammoth 70.20 runs per innings in the West Indies throughout his career – a feat no batsman in his era was able to surpass consistently. From then until his retirement in 1987 he was a mainstay of the Indian batting line-up. In 1983 Gavaskar broke one of the oldest and most prestigious records in the game: Donald Bradman’s total of 29 Test centuries. Gavaskar was the holder of the record for the most number of Test centuries (34) until 2005 when his countryman Sachin Tendulkar broke that record. Gavaskar was the only player to score centuries in each innings, three times (Ricky Ponting equaled this record against South Africa in 2006). He was also the first batsman to reach 10,000 Test runs and held the record for the most number of runs until it was broken by Allan Border. Along with Hannan Sarkar, Gavaskar holds the dubious distinction of being the only Test cricketer to be dismissed with the first delivery of the Test match on three occasions.

Gavaskar was captain of the Indian team on several occasions in the late ‘70s and early ‘80s, though here his record is more mixed. Often equipped with weak bowling attacks he tended to use conservative tactics which resulted in a large number of draws. Still he had several successes as captain especially a 2-0 victory over Pakistan in 1979-80 and a victory in the World Championship of Cricket held in Australia in early 1985. As a matter of fact, it was during his tenure that Kapil Dev emerged as a leading pace bowler for the country. On the downside there was a heavy defeat against Pakistan in 1982-83 which cost him the captaincy until the 1984/85 home series against England.

Gavaskar was also a fine slip fielder and his safe catching in the slips helped him become the first Indian (excluding wicket-keepers) to take over a hundred catches in Test matches. Perhaps his most memorable display of catching was in a one-day international against Pakistan in Sharjah in 1985 when he took four catches and helped India defend a small total of 125. Early in his Test career, when India rarely used pace bowlers, Gavaskar also opened the bowling on occasion. The only wicket claimed by him is of Zaheer Abbas in 1983-84.

While Gavaskar could not be described as an attacking batsman, he had the remarkable ability of keeping the scoreboard ticking with unique shots such as the “late flick”. On occasions however, he would resort to a very attacking mode, such as against West Indies at Delhi in 1983 when he hooked and pulled Michael Holding and Malcolm Marshall to reach his 100 off just 94 balls. Still his style of play was usually less suited to the shorter form of the game, at which he had less success. He famously scored an ignominious 36 not out carrying his bat through the full 60 overs against England in the 1975 World Cup. In contrast to his record-breaking 34 Test centuries, Gavaskar almost went through his career without scoring a one-day century. He finally managed his first in the 1987 World Cup, when he hit a blistering 103 not out against New Zealand in his penultimate ODI innings at Vidarbha Cricket Association Ground, Nagpur.

Gavaskar was named Wisden Cricketer of the Year in 1980 and has also been awarded the Padma Bhushan. In December 1994 he was appointed the Sheriff of Mumbai, an honorary for a year. After retirement, he has been a popular, sometimes controversial commentator, both on TV and in print. He has written four books on cricket – Sunny days (autobiography), Idols, Runs n’ Ruins and One day wonders. He also served as an advisor to the Indian cricket team during the home series against Australia in 2004 and currently serves as the Chairman of the ICC cricket committee.

His son Rohan is also a cricketer who plays at the national level in the Ranji Trophy. He has played some One Day Internationals for India, but could not cement his spot in the team.

Gavaskar failed to carry over his success as a Test batsman to the ODI format. He could not adjust to the pace required in an ODI, and struggled throughout his career. In one of his notorious ODI performances in 1975, he scored 36 not out off 174 balls as an opener with just one Four in reply to England’s 334 in 60 overs. Indian team’s total contribution turned out to be 132 for 3 in 60 overs. It was alleged that Gavaskar deliberately performed poorly in that match, due to his annoyance with the promotion of Srinivas Venkataraghavan to captaincy. He later claimed that he could not adjust to the pace of the game.

In 1981, at the Melbourne Cricket Ground, when Gavaskar was given out by the Australian umpire Rex Whitehead, he ordered his fellow opener Chetan Chauhan to quit the match. Instead of abandoning the match, the Indian manager, SK Durani persuaded Chauhan to return to the match which India went on to win by 59 runs as Australia collapsed to 83 in their second innings.

Recently, he has been involved in a string of controversies as an ICC official. He has been criticized for supporting changes in cricket rules that tend to favor batsmen. In addition, his role as the chief selector for ICC World XI also came under criticism due to some controversial selections, which resulted in one sided matches against the ICC World Champion, Australia.

Sunil is married to Marshaniel Gavaskar (née Mehrotra), daughter of an leather industrialist in Kanpur. They have a son Rohan.