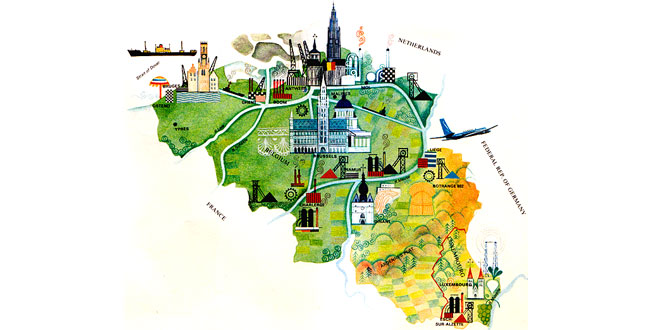 About two-thirds of Belgium is flat and the Ardennes plateau in the south-east is the only upland region. The coast is lined with sand dunes and beaches. The undulating plains of central Belgium, drained by the Meuse and Schelde, are mostly fertile. The Ardennes plateau is partly forested with some grassland.

Agriculture employs about 3 per cent of the work-force. The breeding of cattle, sheep, pigs and poultry is especially important. The chief crops are barley, flax, hops, sugar beet and wheat. Vegetables, fruit and flowers are widely grown. Only about one-fifth of Belgium is forested. The forests grow mainly on the poor soils of the Ardennes, which unsuitable for agriculture.

Industry employs two-fifths of the work-force. Belgium has rich coal fields and some non-ferrous metal ores. Apart from coal mining and gas production, the major industries are steel-making and engineering, followed by electrical engineering and the chemical, food-processing and textile industries. The production of building materials, glassware and pottery is also thriving, as are industries in Antwerp based on imported oil. Brussels is noted for fine lace and Antwerp for cut diamonds.

Belgium has the world’s densest rail network and an excellent system of roads. Rivers and canals are important system. The rivers contain ample water throughout the year and are, therefore, suitable for transport. A number of major ports lie in the river estuaries, the largest being Antwerp on the Schelde.

The country was a founder member of the European Economic Community in 1957. It is a highly developed industrial nation, with a per capita gross nation, with a per capita gross national product of US $11,920. The capital, Brussels, a major air traffic centre, is also the seat of the EEC Commission, Council of Ministers and the Economic and Social Committee, although the European Parliament and Court of Justice are based in Luxembourg.