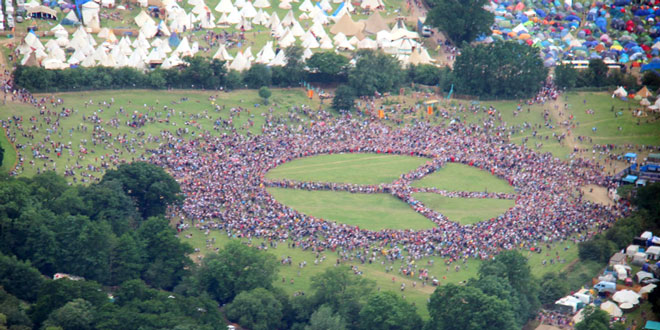 The Guinness World Records world record for the largest human flower consists of 2,405 participants, and was achieved by the Asian Art Museum (USA) in San Francisco, California, USA, on 15 July 2017.

Guinness World Records also recognized the world record for the largest human image of an ear; it consists of 1,215 participants and was achieved by Raindropss and Sathyabama University (both India) in Tamil Nadu, India, on 3 December 2016. e

Organised by the team who run Glastonbury’s green fields as a “message of peace to the world”, the attempt broke the previous world record when 5,814 people performed a similar stunt at Ithaca festival in New York in 2008.

Among those taking part were Emily Eavis and William Hawk, a Native American from the Standing Rock reservation.

Beth Llewellyn, who was behind the record attempt, said: “I thought: ‘Why don’t we get together in the fields, and make this sign around the stone circle with people whose intent is for peace and not to be threatened by the few? We’re just doing it for love.”