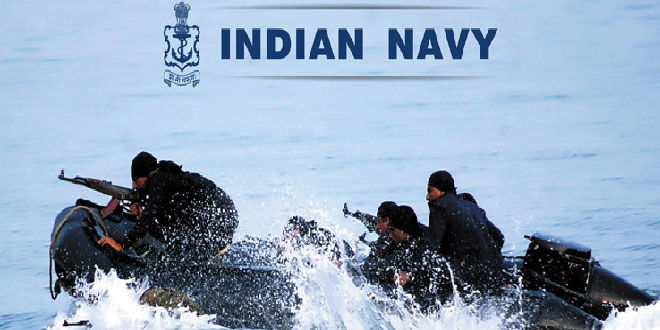 Navy Day In India Information For Students: Navy day in India is observed on 4th of December every year to celebrate the magnificence, achievements and role of the naval force to the country. Indian navy is the marine branch (means naval branch) of the India’s armed forces which led by the President of India as a Commander-in-Chief of the Indian Navy. The Maratha emperor, Chhatarpati Shivaji Bhosle of the 17th century is considered as “Father of the Indian Navy”.

Navy of the India plays a great role in securing the marine borders of the country as well as enhancing the international relations of India through many ways like seaport visits, joint exercises, humanitarian missions, calamity relief and etc. Modern Indian navy has as undergone speedy renovation in order to improve the position of navy to the Indian Ocean region. According to the report, the strength of the Indian Navy includes of 58,350 personnel, an aircraft carrier, a big transport dock, 15 frigates, 8 guided missile destroyers, 24 corvettes, 13 conventional submarines, 1 nuclear attack submarine, 30 patrol vessels, 7 mine countermeasure vessels including variety of auxiliary ships.

India would celebrate the 49th anniversary of the Indian navy this year (2020) on 4th of December in order to remember the daredevil attack on the naval base of Pakistan, at Karachi. In order to celebrate this occasion, the Western Naval Command of the Indian navy (headquarter is Mumbai) bring their ships and sailors for making the celebration excellent.

All the activities which to be conducted on the celebration of the event are planned by the eastern Naval Command at Visakhapatnam. Wreath laying ceremony is held at the war memorial (at RK Beach) followed by the operational demonstration to show the potential and resourcefulness of the naval submarines, ships, aircraft and unique forces. Various aircraft are shown by flying over the RK Beach that’s why people are requested by the authorities to keep the beach clean and litter free (avoid throwing food items) to keep away the birds in that particular area for smooth demonstration of the aircraft (as presence of birds in the sky because of food items may cause hazards to the aircraft).

Why Navy Day is Celebrated:

A community service for the navy of India is conducted by the Naval Institute of Aeronautical Technology (NIAT) from 24th of November to the 26th of November at Good Hope Old Age Home, Fort Kochi in which the students from the Navy Children School Chair take parts to entertain the inmates and Naval doctors (from INHS Sanjivani) provides medical checkup to the inmates. Navy Ball, Navy Queen contests including the Navy fest are held to celebrate the navy day.

At this day the warships and aircraft of the Indian naval are open to the visitors such as school children. The Military Photo Exhibition is also performed by photojournalists of the Ernakulum in the Navy fest.

The Day India Bombed Karachi: Why We Celebrate 4 Dec as Navy Day