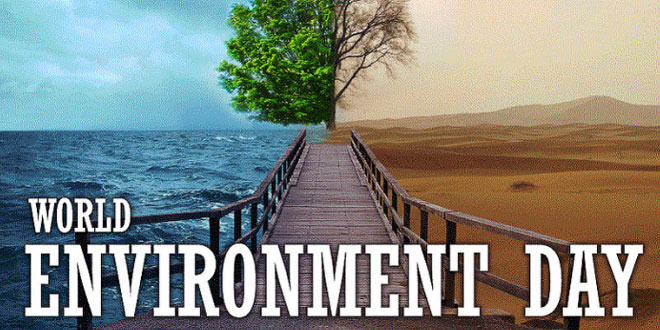 It was started in 1972 by the United Nations Assembly when the United Nations Conference on the Human Environment began. Every year, the UN chooses different themes and different locations for the celebrations. The first event was celebrated in 1974 in the United States and the theme was ‘Only One Earth’. Subsequently, in the following years different themes were observed relating to saving energy, responsible use of resources, impact of haphazard use, etc. This year the focus is on consumption of resources and energy. Following the UN initiative, various other organizations, media houses, corporate establishments started observing ‘World Environment Day‘. Many schools celebrate ‘Environment Week’ in the week that follows or runs up to June 5th.

Humans are both creatures and moulders of their environment, which gives them physical sustenance and affords them the opportunity for intellectual, moral, social and spiritual growth. In the long and tortuous evolution of the human race on this planet a stage has been reached when, through the rapid acceleration of science and technology, humans have acquired the power to transform their environment in countless ways and on an unprecedented scale.

The United Nations, aware that the protection and improvement of the human environment is a major issue, which affects the well-being of peoples and economic development throughout the world, designated 5 June as World Environment Day. The celebration of this day provides us with an opportunity to broaden the basis for an enlightened opinion and responsible conduct by individuals, enterprises and communities in preserving and enhancing the environment. Since it began in 1974, it has grown to become a global platform for public outreach that is widely celebrated in more than 100 countries.

The theme for 2020 is “Celebrate Biodiversity“, and will be hosted in Colombia in partnership with Germany. Colombia is one of the largest “Megadiverse” nations in the world to hold 10% of the planet’s biodiversity. Since it is part of the Amazon rain forest, Colombia ranks first in bird and orchid species diversity and second in plants, butterflies, freshwater fish, and amphibians.

Each World Environment Day is organized around a theme that focuses attention on a particularly pressing environmental concern. The theme for 2019, “Beat Air Pollution“, is a call to action call to combat this global crisis. Chosen by this year’s host, China, this year’s topic invites us all to consider how we can change our everyday lives to reduce the amount of air pollution we produce, and thwart its contribution to global warming and its effects on our own health.

Understanding the different types of pollution, and how it affects our health and environment will help us take steps towards improving the air around us. Often you can’t even see it, but air pollution is everywhere. We can’t stop breathing, but we can do something about the quality of our air. Nine out of ten people worldwide are exposed to levels of air pollutants that exceed safe levels set by the World Health Organization. There is little doubt – we are faced with an urgent task.