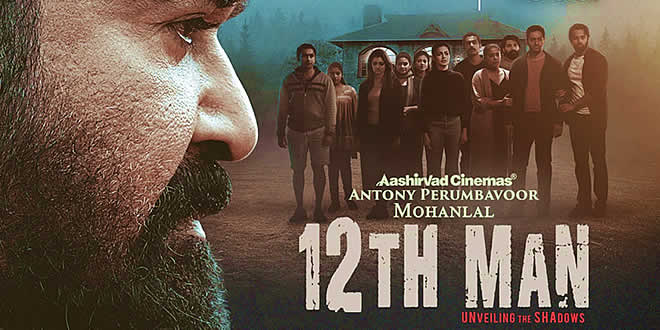 This is a mystery involving 12 people, taking place over a period of 24 hours.

Principal photography began in August 2021 and lasted for 48 days, concluding in early October. The film was shot extensively in a custom-built mansion inside a hill-side resort in Idukki district, and a few days in Ernakulam. The film is scheduled to be released on 20 May 2022 on Disney+ Hotstar.

Twelve strangers from different walks of life are invited by an unknown host to attend a private party at a solitary bungalow remotely off the city limits.

On 5 July 2021, actor Mohanlal announced 12th Man as his continued and forthcoming collaboration with director Jeethu Joseph following the release of their film Drishyam 2 earlier that year, he also shared a title poster. Antony Perumbavoor of Aashirvad Cinemas returned as the producer. The announcement came amid the suspended production of Ram, their unfinished project, which was put on hold indefinitely due to the COVID-19 pandemic in India. The screenplay was written by K. R. Krishna Kumar. While describing what the film would be like, Jeethu told in an interview that “The movie tells the story of 12 people. About 90 percent of the movie is set in a single location and the rest is outside. 12th Man is a mystery that compares to the likes of films based on Agatha Christie’s books”. Jeethi said that the story takes place in 24 hours and contains suspense and a film like 12th Man can be made within the restrictions of COVID-19 pandemic and they would begin filming once the government lifts the pause on film productions.

Kumar described the film as a mystery thriller. He took one-and-a-half years to complete the screenplay. It was one-and-a-half years ago (as of July 2021) that he discussed the story of 12th Man with Jeethu, but they shifted their focus to another project instead featuring another actor which was supposed to begin first. In meantime, Jeethu told the story to Mohanlal and Antony at the sets of Drishyam 2 and the final screenplay was send to Jeethu while he was filming Telugu film Drushyam 2 who in turn read it to Mohanlal and Antony and the project was green-lit. 12th Man was then planned as to begin in 2022 only after the completion of Mohanlal’s Barroz: Guardian of D’Gama’s Treasure and Ram. However, after the surge of the second wave of COVID-19 spread in India they were compelled to postpone the film as it required multiple location shoots, which was difficult with COVID-19 restrictions in effect, but 12th Man only required two locations, hence they decided to move ahead with 12th Man instead.

There are a total of 14 characters in the film. The final principal cast include Mohanlal, Unni Mukundan, Saiju Kurup, Rahul Madhav, Anu Sithara, Leona Lishoy, Anu Mohan, Anusree, Chandunadh, Aditi Ravi, Sshivada, and Priyanka Nair. Mukundan read the screenplay while he was filming for Bro Daddy. Shine Tom Chacko, Veena Nandakumar, and Santhi Priya were in the initial cast but replaced.

Principal photography began on 17 August 2021 coinciding with the Kerala New Year on the first day of the Malayalam month Chingam. It commenced with a customary pooja ceremony in Ernakulam. Shooting then took place at GreenBerg Holiday Resorts in Kulamavu, Idukki district. Mohanlal joined the set on 15 September. Idukki was the primary location of the film. Filming was completed on 3 October after 48 days of shooting. Satheesh Kurup was the film’s cinematographer. Shooting of the film was delayed by five days due to rain and mist. It was the first instance in Jeethu’s career that filming went beyond the scheduled dates. He said “12th Man requires quite a bit of post-production work”.

The film is scheduled to be released on 20 May 2022 through Disney+ Hotstar.

The film’s concept has enough in it to keep the audience hooked till the end, but more often than not, one gets the feeling of watching a game show rather than an investigative thriller

At the centre of 12th Man is a group of friends, whom we are told are still very close, years after college. But in all those initial scenes involving them, we wonder whether they are friends or game show participants who are plotting against each other and gossiping behind each others’ backs. If this was not enough, the feeling is further accentuated when the film itself shifts into a game show mode with the characters viewing each other with suspicion.

The eleven friends, including their spouses, have got together at a hill station resort to celebrate the bachelor party of the last unmarried person in the group. But the celebratory mood, despite interruptions from a perpetually drunken stranger (Mohanlal), quickly disappears when they decide to play a game to prove that they do not have any secrets to keep from each other. Soon, it appears that most of the people in the group have secrets which could put their friendship in jeopardy. A death which happens later in the night further complicates matters.

In 12th Man, Jeethu Joseph returns yet again to the thriller genre, his most comfortable space, but the script written by K.R.Krishnakumar, based on Sunir Khetarpal’s story, brings back memories of the many movies based on Agatha Christie’s works. The classic signs of this are in the isolated setting cut off from the outside world, and in the plot where one among a group dies leading to all of the remaining becoming suspects. On top of this familiar setting has been placed a novel idea derived from the much remade Italian film Perfect Strangers, in which a group of friends at a get-together play a game revealing the contents of all the calls and messages that they receive during that time.

It is a concept which has enough in it to keep the audience hooked till the end, but more often than not, one gets the feeling of watching a game show rather than an investigative thriller. The interesting bits are in their behavioural shifts, initially uttering half-truths and even lies, and later attempting to cover up when confronted with evidence to the contrary.

After a point, the scriptwriter seems to be labouring to turn the needle of suspicion towards each one of them, with quite a few red herrings thrown in. This also has to do with the movie’s runtime, which at over 160 minutes, is a bit of a stretch for such a plot.

The investigation gets long-winded and tiring after a point, so much so that with the suspicion landing on every new person, one wishes for the mystery to get solved soon, only to watch helplessly as another person becomes the suspect. The mystery, when it is finally revealed after all the twists and turns, does not manage to shock us much too. But then, it is unfair to expect a Drishyam from every other movie of Jeethu Joseph.

Ultimately, the familiar settings and a long-winded investigation becomes the undoing of 12th Man, which has derived inspiration from multiple sources.