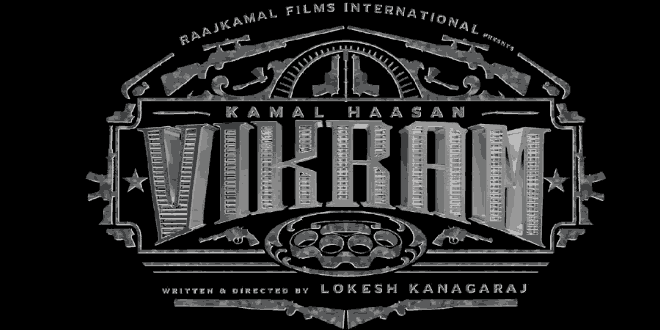 Vikram is an upcoming Indian Tamil-language action thriller film written and directed by Lokesh Kanagaraj and produced by Raaj Kamal Films International. The film features an ensemble cast with Kamal Haasan, Fahadh Faasil , Vijay Sethupathi in the lead roles along with Shivani Narayanan, Kalidas Jayaram, Narain, Antony Varghese and Arjun Das in supporting roles. The soundtrack and film score is composed by Anirudh Ravichander, with cinematography handled by Girish Gangadharan and editing done by Philomin Raj.

The film is not a sequel to the Vikram by name, though the film’s official title teaser (released 7 November 2020) used a remixed version of the theme song from the 1986 film.

Lokesh Kanagaraj was signed by Kamal Haasan’s production house Raaj Kamal Films International to direct a film for the studio during November 2019. For which he had previously mentioned his admiration of Kamal Haasan’s work, noting that two of the actor’s films, Sathya (1988) and Virumaandi (2004), had influenced him to become a film director. Despite agreeing terms, both the director and the studio opted to prioritise commitments, for other films before beginning production work. Lokesh narrated the script of the proposed film to Rajinikanth during December 2019. The project which was tentatively titled as Thalaivar 169, was scheduled to be launched in March 2020. Despite the progress of discussions, the COVID-19 pandemic delayed the launch of the film.

In September 2020, Lokesh announced a different project, that would feature Kamal Haasan in the lead role. The film’s official poster was released on 16 September 2020, which came under the tentative titles as Kamal Haasan 232, a 232nd film to Kamal Haasan and Evanendru Ninaithaai, a titular song from his film Vishwaroopam (2013), and it features Anirudh Ravichander scoring music for the film, collaborating with Kamal Haasan and Lokesh for the second time after Indian 2 and Master. The team shot for a promotional teaser of the film during October 2020 in Chennai, adhering to the COVID-19 safety regulations suggested by the Indian government. Coinciding with the actor’s 66th birthday, 7 November 2020, the makers unveiled the title teaser of the film, featuring Kamal Haasan, in which the title of the film was revealed to be Vikram, a repeat of an earlier film of the same name, starring the actor which was released in 1986.

After Kamal Haasan’s commitments during the 2021 Tamil Nadu legislative assembly elections, on 7 April, a post was shared by Lokesh Kanagaraj through his social media handles, anticipating that the pre-production works for the film had begun. Since Haasan decided to shoot for the film only after the election results, since he contested in the Coimbatore South constituency, he demanded Lokesh to make changes in the script, however, that was delayed due to the pandemic. Initially, it was planned as a single shooting schedule for 60 days, with a new technology, that would shorten the days of film production, being undisclosed, did not happen as plan. In the film, Kamal Haasan was reported to play a retired police officer and media reports stated that he will don a “khaki uniform” for this film, after 15 years since the Gautham Vasudev Menon-directorial Vettaiyaadu Vilaiyaadu (2006). He was reported to sport a thick beard in the film. For the flashback portions, Lokesh Kanagaraj reported to use de-aging technology for the film. The flashback sequence in its entirety, was eventually said to be cost around ₹10 crore, particularly for the technology used in the film.

The film’s soundtrack and background score is composed by Anirudh Ravichander, making this his second collaboration with Lokesh Kanagaraj and Kamal Haasan after Master and Indian 2 respectively. The film’s official title teaser (released 7 November 2020) used a remixed version of the theme song from the 1986 film of the same name. It has been reported that actor Kamal Haasan has been written a kuthu song, which will also features vocals by him. The music rights were purchased by Sony Music.

The film was initially scheduled for theatrical release in April 2022. However, following the releases of multiple big-budget films during that month, the makers decided to prepone the release to 31 March 2022. The Hindi dubbing rights of the film were sold for ₹37 crore (US$4.9 million) to Goldmines Telefilms, prior to the announcement of theatrical release. In late-February 2022, it was announced that the post-theatrical (satellite broadcasting and digital streaming) rights were acquired by Star India Network for ₹112 crore (US$15 million). Many trade pundits claimed the film as the “hottest in the trade”. Release date of the film is said to be announced on March 14, 2022.

Lokesh Kanagaraj, with films like Kaithi and Master, is evolving into a filmmaker Tamil cinema needs to take seriously and celebrate. What he’s attempted and achieved with his latest film Vikram, which marks the glorious comeback of Kamal Haasan after a lull, is something that not many filmmakers can even envision, let alone execute.

A self-confessed Kamal Haasan fan, Lokesh not only paid a heartfelt tribute to his ‘guru’, with Vikram – a sequel of sorts to Kamal’s 1986 film of the same name – he teased the beginning of a franchise; one that could keep Kamal active for years to come. Vikram allows Kamal to have fun, and he’s helped by Fahadh Faasil and Vijay Sethupathi, who make their presence felt with strong performances.

Vikram begins where Lokesh’s Kaithi left off. Months after the biggest drug bust Tamil Nadu police ever pulled, two containers full of drugs went missing in Chennai, and local gangs have to retrieve it at any cost before the crime lord and the leader of the drug mafia Rolex – played by Suriya – makes everybody pay. Meanwhile, a group of masked men are on a killing spree, taking the lives of some high-ranking officers, which includes a young official in the narcotics control bureau, played by Kalidas.

Kamal plays Karnan in the film. When his son becomes a victim of the gang, he sets out on a mission to take revenge. What feels like just another tale of revenge soon turns into a mission orchestrated by Karnan, who is introduced much later as agent Vikram – the original character essayed by Kamal in the 1986 film.

You’ve got to hand it to Lokesh Kanagaraj for bringing back Kamal’s highly-underrated agent Vikram character, three decades later; and using it so effectively in a story that couldn’t have been told better.

However, the film does falter at places and isn’t consistently engaging, but it manages to merge key characters from Lokesh’s earlier film Kaithi and sets the stage for what could be Tamil cinema’s biggest franchise in the making. What Lokesh manages to achieve with Vikram, which feels slightly long with nearly a three-hour running time, is to give a new generation of audiences a glimpse of Kamal Haasan’s versatility. It was rewarding to see the veteran shine after a long time.

If you can look at Vikram beyond some of its rough edges, this is easily the most satisfying love letter to Kamal Haasan from Lokesh Kanagaraj, who is his big fan. It is amazing to see Kamal warm up to a young filmmaker’s sensibilities and be willing to not hog all the limelight in the movie. For most of the first half, Kamal is nowhere to be seen, but he makes a solid impact in the scenes he’s present.

Fahadh Faasil gets the second most meaty part among the ensemble cast; and he’s terrific. Vijay Sethupathi continues to shine in peculiar roles that are best suited for his personality, and it’s refreshing to see Lokesh use him efficiently after Master.

Anirudh Ravichander’s music, especially the background score, plays a pivotal role in amplifying the overall experience of watching Vikram on the big screen, apart from the terrific action sequences. Suriya’s brief but powerful cameo is just the high one needs as you step out of Vikram.