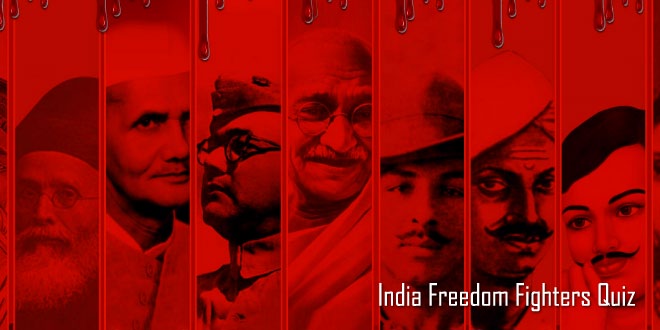 India Freedom Fighters Quiz For Students And Children: Beginners Quiz of 23 questions about Independence of India and it’s freedom fighters.

The Indian independence movement consisted of efforts by individuals and organizations from a wide spectrum of philosophies to obtain political independence from British, French and Portuguese rule through the use of a variety of methods.

Post-Independence, “Freedom fighter” is an officially-recognized category by the Indian government covering those who took part in the movement; people in this category (can also include dependent family members) get pensions and other benefits like special railway counters.

India got Independence through the efforts of many Great Freedom Fighters in India and obtained the political independence from British, French and Portuguese. The war to obtain India free lasted for many years and finally after the long struggle by many people, it was relieved by the British Colonial.

The freedom fighters of India played an extensive role in getting independence for the country. The ‘Revolt of 1857’ was the first war of independence of India. The revolt started as a mutiny by the sepoys of the East India Company. The Muslim and the Hindu sepoys together began this revolt. Maharani Lakshmibai, Mangal Pandey, Bahadur Shah Zafar, Nana Sahib and Tatya Tope were some of the active leaders and freedom fighters who fought in the revolt. Mangal Pandey is considered as the hero in the modern India because he had played a pivotal role in beginning the revolt against the British. Rani Lakshmibai is considered as the symbol of resistance to the British rule and was one of the leading figures of the rebels in 1857.

In 1876, another movement started against the British rule. It was the foundation of the Indian National Congress (INC). Surendranath Banerjee laid the foundation of the party. Bal Gangadhar Tilak, Dadabhai Naoroji, Chittaranjan Das and Jawaharlal Nehru were active leaders of the INC. It was Mohandas Karamchand Gandhi who gave a push to the party and raised the struggle for freedom in a non-violent way. His Non-Cooperation Movement was a great success and a stepping stone for Indian freedom struggle.