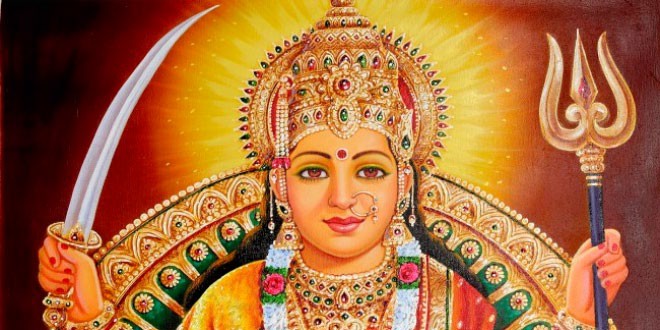 Why Navratri comes twice a year? Every year the beginning of summer and the beginning of winter are two very important junctures of climatic change and solar influence. These two junctions have been chosen as the sacred opportunities for the worship of the divine power because:

The festival of Navratri occurs twice every year. One is called Ashwina Navratri falling in the month of Ashwina (September – October) and the other is named as Chaitra Navratri observed in the month of Chaitra (March – April). The former is the most common one popularly celebrated by the Hindus in India, while the latter is not known to many.

The common aspect behind both these Navratris is that it is celebrated in honor of Mother Durga, who is differently called as Parvati, Shakti, Uma, Gowri, Katyayani and several other names. The feminine energy of the Supreme Godhead is said to manifest in three forms namely Durga, Lakshmi and Saraswati, the embodiment of power, wealth and wisdom. The Navratri herals, praises and worships all these three forms in myriad ways.

The legend behind Navratri goes thus. Long ago, there was a demon called Mahishasura who had a buffalo’s head. He had done rigorous penance and received several boons from Lord Shiva himself. When his pride and arrogance grew, he started troubling the gods and humans. Hence he could not be subdued by anyone, Mother Durga manifested from the powers of all gods and goddesses and ended the demon’s evil ways by killing him and liberating him.

Navratri celebrates the victory of god over evil. Anything that is started on the final day of Vijayadashami is said to move towards success. People celebrate this festival with great devotion, religious fervor and artistic involvement. This event turns out to be a highly colorful one participated by young and the old alike. The Navratri festival has different colors throughout India.

Talking of why we have two Navratris, note that both these schedules occur during the juncture of seasonal changes before the onset of winter and summer. During these times, the nature assumes a major change shifting from one set of colors to another. This is what is heralded by the Navratri celebration by worshiping Mother Durga who embodies the nature itself.

The mythological evidences state that the most popular Navratri during bygone times was the Navratri during summer namely the Chaitra Navratri. However, the other one which is popular today as the Ashwina Navratri during winter gained popularity only after Sri Rama’s time.

It is said that Sri Rama observed this Navratri for the first time before he went to Lanka to fight with Ravan, the demon King. This as because, while he wanted to get the blessings of Mother Durga, he did not want to wait for another six months to do the puja and then go to the war. From then onwards, the Ashwina Navratri became famous.