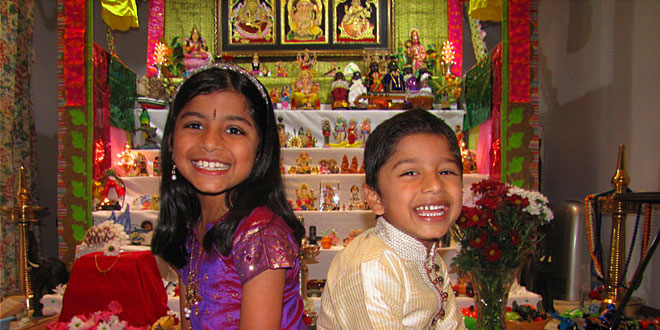 What is Navratri Kolu or Navarathri Golu? Bommai Kolu or Bommala Koluvu is the artistic display of dolls by women during Navratri and Dussehra in Tamil Nadu, Andhra Pradesh, Karnataka and among certain communities in Kerala. The dolls, called Kollu or Golu, represents the durbar or assembly of Goddess Durga. This assembly is held just before Mother Goddess ventures on her mission to slay Mahishasura, the buffalo-headed demon. Therefore when depicted along with the ‘kolu’, Goddess Durga is also referred as Mahishasura-mardini.

Earlier, special artisans were invited to homes to create kolu dolls. But nowadays most people rely on ready made kolu dolls and ‘special Bommai kolu’ sets that hit the market during the period. The kolu arrangement is a forte of women and young girls. Creative women add new dolls to their collection each year. Some women collect dolls throughout the year keeping in mind the Navratri Kolu. It must be noted here that some of the dolls used in Navratri kolu are very old as they have been handed down to generations.

But sadly the Bommai Kolu ritual is no longer held as elaborately as they used to be in houses. Nowadays, people rarely find time to collect or make dolls and therefore the Bommai Kolu is slowly becoming a community affair. The huge collection of dolls from various households in an area makes the community Bommai Kolu a grand affair.

How the Navratri Kolu Dolls are Traditionally arranged?

The Navratri or Dasara kolu is displayed on stairs created from wood. The number of steps depends on the availability of the dolls. The maximum number is nine – representing the nine days of Navratri. Usually, the steps erected are even numbers – 1, 3, 5, 7, 9 or 11.

There are no hard and fast rules for arranging the dolls. Nowadays, the arrangement depends on the availability of dolls. In most places, the entire nine steps will be filled with statues of various gods and goddesses in Hindu pantheon. For some, the Navratri Kolu is a simple arrangement of various deities in three steps.

The topmost three steps are dedicated to various gods and goddesses. In some areas, people place a ‘Purna Kumbham’ on the topmost step.

The next three steps – 4, 5 and 6 – are dedicated to Gurus, saints, religious personalities and other highly respected figures in the country and world.

The seventh step is dedicated to various social activities and festivals. People depict marriages and important festivals in this step.

Business, crafts and other economic activities are depicted in the eighth step. Creative women depict a buzzing market place and other activities.

The ninth step is dedicated to dolls made of wood. Dolls of men, women, children, animals and birds are placed in this step.

During Bommai Kolu, the entire neighborhood, friends and relatives gather in a house and sing bhajans dedicated to Goddess Durga. Special sweets are prepared during the period.

On the Vijayadashami day (the tenth day), the dolls are taken out.

Previous Why we worship Mother Goddess on Navratri?
Next What are Pooja rituals done daily during Navratri?