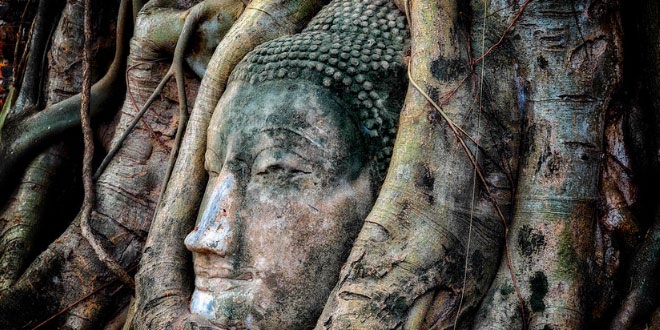 Buddha was born in B.C. 560 and died at the age of eighty in B.C. 480. The place of his birth was a grove known as Lumbini, near the city of Kapilavastu, at the foot of Mount Palpa in the Himalayan ranges within Nepal. This small city Kapilavastu stood on the bank of the little river Rohini, some hundred miles north-east of the city of Varanasi, India.

As the time drew nigh for Buddha to enter the world, the gods themselves prepared the way before him with celestial portents and signs. Flowers bloomed and gentle rains fell, although out of season; heavenly music was heard, delicious scents filled the air. The body of the child bore at birth the thirty-two auspicious marks (Mahavyanjana) which indicated his future greatness, besides secondary marks (Anuvyanjana) in large numbers. Maya died seven days after her son’s birth. The child was brought up by Maya’s sister Mahaprajapati, who became its foster-mother.

The Buddha is a titled used to refer to a man named “Siddharth Gautama”. It means Fully Awakened One. He was born in a region of what is now known as Nepal and was the person who created the religion of Buddhism. He lived from about 563 BC to about 483 BC.

He is also called Shakyamuni Buddha because he was a member of the Śākyan clan, the ruling class of an aristocratic republic in that region.