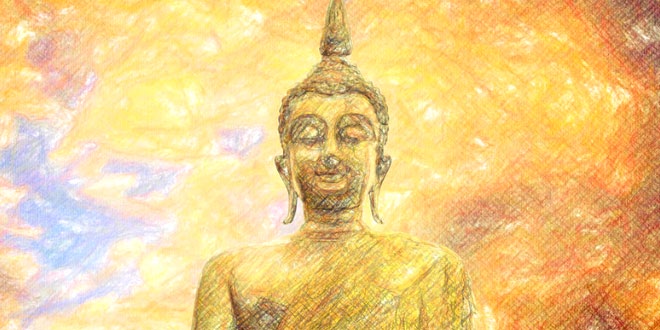 Awareness: Gautama Buddha Poetry – Siddhartha, who later became known as the Buddha – or The Enlightened One – was a prince who forsook the comforts of a palace to seek enlightenment. He realized the essential unreality of the world and experienced the bliss of Nirvana. After his enlightenment, he spent the remainder of his life teaching others how to escape the endless cycle of birth and death.

The wise having clearly understood this,
delight in awareness
and find joy in the knowledge of the noble ones.
These wise ones, meditative, persevering,
always using strong effort,
attain nirvana, the supreme peace and happiness.

If a person is awake, aware, mindful, pure, considerate,
self-restrained, and lives according to duty,
that person’s glory will increase.
By awakening, by awareness, by restraint and control,
the wise may make for oneself
an island which no flood can overwhelm.

Whoever meditates with awareness obtains great joy.
When the wise conquer thoughtlessness by awareness,
climbing the terraced heights of wisdom,
free from sadness viewing the sad crowd below,
they gaze upon the fools, like one on the mountain peak
gazes upon those standing on the plain.

Aware among the thoughtless, awake among the sleepy,
the wise advances, like a racehorse leaves behind the slow.
By awareness Indra rose to become chief of the gods.
People praise awareness; thoughtlessness is always blamed.

Previous Flowers: Gautama Buddha Poem For Students
Next Where was Lord Buddha born?