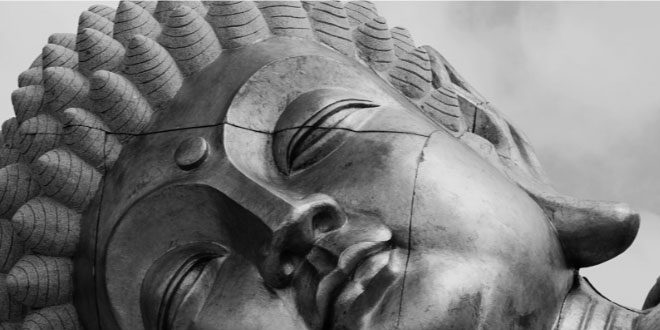 The Wise – The Buddha: The history of Buddhism is the story of one man’s spiritual journey to Enlightenment, and of the teachings and ways of living that developed from it.

Siddhartha Gautama – The Buddha: By finding the path to Enlightenment, Siddhartha was led from the pain of suffering and rebirth towards the path of Enlightenment and became known as the Buddha or ‘awakened one’.

If you see a wise person who shows you your faults,
who shows what is to be avoided,
follow that wise person
as you would one who reveals hidden treasures;
you will be better not worse for following that one.
Let one admonish; let one teach; let one forbid the wrong;
and one will be loved by the good and hated by the bad.

Whoever drinks in the truth
lives happily with a serene mind.
The wise are joyful in the truth
revealed by the noble ones.

Engineers of canals guide the water;
fletchers make the arrow straight;
carpenters shape the wood;
the wise mould themselves.

Good people walk on regardless of what happens to them.
Good people do not babble on about their desires.
Whether touched by happiness or by sorrow,
the wise never appear elated or depressed.

Few are those people who reach the farther shore;
the other people here run along this shore.
But those who, when the truth has been taught to them,
follow the truth, will pass over the dominion of death,
however difficult to cross.

Leaving behind the path of darkness
and following the path of light,
let the wise person go from home to a homeless state,
in retirement looking for enjoyment
where enjoyment seemed difficult.
Letting go of all pleasures, calling nothing one’s own,
let the wise cleanse oneself
from all the troubles of the mind.

Those whose minds are well grounded
in the elements of enlightenment,
who without clinging to anything
find joy in freedom from attachment,
whose appetites have been conquered,
and who are full of light,
they are free in this world.

∼ “The Wise” poetry by ‘Gautama Buddha‘

A life of luxury

Opinions differ as to the dates of Siddhartha Gautama’s life. Historians have dated his birth and death as circa 566-486 BCE but more recent research suggests that he lived later than this, from around 490 BCE until circa 410 BCE.

He was born into a royal family in the village of Lumbini in present-day Nepal, and his privileged life insulated him from the sufferings of life; sufferings such as sickness, age and death.

One day, after growing up, marrying and having a child, Siddhartha went outside the royal enclosure where he lived. When he went outside he saw, each for the first time, an old man, a sick man, and a corpse.

This greatly disturbed him, and he learned that sickness, age, and death were the inevitable fate of human beings – a fate no-one could avoid.

Siddhartha had also seen a monk, and he decided this was a sign that he should leave his protected royal life and live as a homeless holy man.

Siddhartha’s travels showed him much more of the the suffering of the world. He searched for a way to escape the inevitability of death, old age and pain first by studying with religious men. This didn’t provide him with an answer.

A life of self-denial

Siddhartha encountered an Indian ascetic who encouraged him to follow a life of extreme self-denial and discipline.

The Buddha also practised meditation but concluded that in themselves, the highest meditative states were not enough.

Siddhartha followed this life of extreme asceticism for six years, but this did not satisfy him either; he still had not escaped from the world of suffering.

The middle way: The Wise

He abandoned the strict lifestyle of self-denial and ascetism, but did not return to the pampered luxury of his early life.

Instead, he pursued the Middle Way, which is just what it sounds like; neither luxury nor poverty.

One day, seated beneath the Bodhi tree (the tree of awakening) Siddhartha became deeply absorbed in meditation, and reflected on his experience of life, determined to penetrate its truth.

He finally achieved Enlightenment and became the Buddha. The Mahabodhi Temple at the site of Buddha’s enlightenment, is now a pilgrimage site.

Buddhist legend tells that at first the Buddha was happy to dwell within this state, but Brahma, king of the gods, asked, on behalf of the whole world, that he should share his understanding with others.

The Teacher: The Wise

Buddha set in motion the wheel of teaching: rather than worshiping one god or gods, Buddhism centers around the timeless importance of the teaching, or the dharma.

For the next 45 years of his life the Buddha taught many disciples, who became Arahants or ‘noble ones’, who had attained Enlightenment for themselves.

Previous What is the Buddha’s teaching about caste and colour?
Next The Fool: Gautama Buddha English Poetry