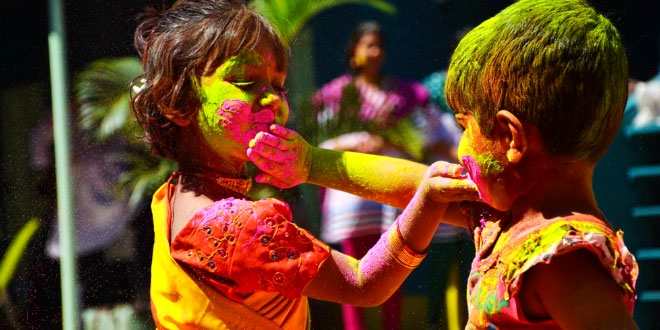 When is Holi Festival celebrated?

Holi falls in the lunar month of Phalguna according to the Hindu calendar. This date corresponds in the months of February or March as per the Gregorian calendar. It is marked on the last full moon day (Phalgun Purnima). The festival of Holi is a celebration of unity and brotherhood wherein festivities are observed with high spirits irrespective of caste, creed, color, race, status or sex. The main day of the festival is known as Holi, also referred to as Dhuli Vandana in Sanskrit, or Dhulheti, Dhulandi or Dhulendi. This is observed by throwing and smearing colored powder on one another. The day before Holi is known as Holika Dahan, or Chhoti Holi, which means ‘burning of Holika’. This takes places on the night before Holi.

This is marked by lighting bonfires signifying the destruction of the demoness Holika. The demon-king Hiranyakashipu asked his sister Holika to carry his young son Prahlad in a blazing fire to end Prahlad’s devotion towards Lord Vishnu. Holika had a boon to escape unburnt even from fire. However, this boon ended as soon as Holika entered the fire and burnt into ashes while Prahlad came out unharmed. Hence, people light bonfires to mark the victory of goodness over evil on Holika Dahan. The next day brings in a lot of fun play with colors. Red, green, blue, yellow, black, and silver, all mix up in the festivity of unity highlighting the essence of the occasion.

When is Holi Festival celebrated?