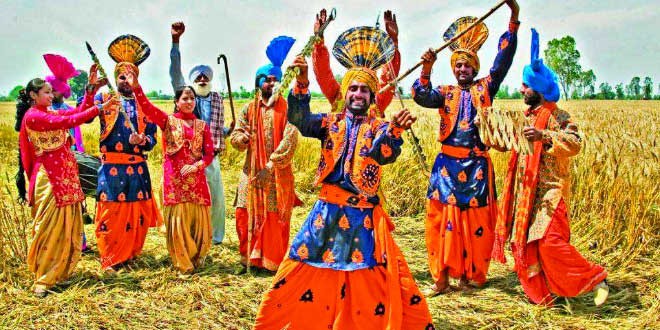 What is Baisakhi and how it is celebrated?

What is Baisakhi and how it is celebrated? For people in northern parts of India, especially the Sikhs, Baisakhi is a mega event – it is a religious festival, harvest festival and New Year‘s Day all rolled into one. In April, this day marks the beginning of the Hindu solar New Year. In fact, this day is celebrated all over the country as New Year day, under different names. For the Sikh community, Baisakhi has a very special meaning. It was on this day that their tenth and last Guru – Guru Gobind Singh – organized the Sikhs into Khalsa or the ‘pure ones’. By doing so, he eliminated the differences of high and low and established that all human beings are equal.

What is Baisakhi and how it is celebrated?

Sikhs assign quite a different meaning to Baisakhi, and if you happen to be in a Punjabi village to catch the men performing the wild bhangra dance, you’ll get the clear picture. This strenuous dance tells the story of the agricultural process, from tilling the soil through harvesting. As the dholak (drum) changes beats, the dancing sequence progresses, dramatizing plowing, sowing, weeding, reaping, and finally celebrating. Baisakhi also commemorates the day in 1689 when Guru Gobind Singh founded the Khalsa, the fighting Sikh brotherhood that donned the distinctive Sikh outfits.

Sikhs visit temples, such as the Golden Temple in Amritsar, where the holy Granth is read, commemorating the day on which the Guru asked five volunteers to offer their lives, then took them one at a time into a tent. He emerged each time with a bloody sword, although he had in fact sacrificed a goat. In honor the “Beloved Five,” a series of parades are held, in which sets of five men walk in front of the holy book with swords drawn. When the ceremony is over, a round of feasting, music-making, and dancing begins, amid the blossoming flowers and harvested grain.

Baisakhi has special significance for two of India’s major religious groups. For the Hindus, it is the start of the New Year, and is celebrated with requisite bathing, partying, and worshiping. It’s believed that thousands of years ago, Goddess Ganga descended to earth and in her honor, many Hindus gather along the sacred Ganges River for ritual baths. The action is centered in the holy cities along the Ganges in north India, or in Srinagar’s Mughal Gardens, Jammu’s Nagbani Temple, or anywhere in Tamil Nadu. Hindus plant poles (wrapped in flags of god-embroidered silk) in front of their homes, and hang pots of brass, copper or silver on top.

Children wear garlands of flowers and run through the streets singing “May the new year come again and again!” In Kerala, the festival is called ‘Vishu’. It includes fireworks, shopping for new clothes and interesting displays called ‘Vishu Kani’. These are arrangements of flowers, grains, fruits, cloth, gold, and money are viewed early in the morning, to ensure a year of prosperity. In Assam, the festival is called Bohag Bihu, and the community organizes massive feasts, music and dancing.

Previous What is Baisakhi?
Next Baisakhi: The New Season English Poetry