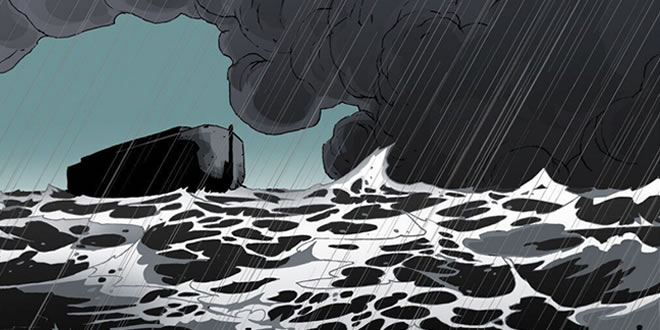 Stories from the Bible, The animals and creatures that God had put upon the earth all died. Soon the houses and the towns and villages disappeared under the water…

The Flood: Story From Old Testament

After Noah and his family and all the birds and animals were safely inside the ark they waited for God to keep his promise. For seven days they waited. Then as God had said, The flood began.

The rain began to fall. Drop, drop, and drop! It rained, rained and rained-for forty days and forty nights. Water began to cover the grass. Then the small trees were swallowed up in the floods. The animals and creatures that God had put upon the earth all died. Soon the houses and the towns and villages disappeared under the water. There was no hope for the people who lived in them. There was no place for them to go.

Still the floods came. Even the highest mountain and tallest trees were covered with water. The whole earth looked like the ocean.

The ark floated on top of the water. God was taking care of Noah just as he had promised he would. Inside Noah and his family were tossed about, but they were not afraid because they knew that God was with them.

At last the rain stopped. But Noah had to stay in the ark for many more days until the water had gone down. The winds began to blow and dry up the water. The warm sun began to shine. The water was lower and lower each day. Finally, the ark came to rest on top of Mount Ararat.

Noah opened the window of the ark and sent out a raven to see if the water had dried up. he also sent out a dove. When the dove came back, Noah knew that he must stay in the ark a little longer.

Seven days later, Noah sent out dove again, but it did not return at once. All day Noah and his family waited for the dove to come back. When it was evening, the bird flew back with a leafy branch in its beak. Noah knew that the trees were appearing and that the land would soon be dry.

It was a happy day for Noah and his family. How glad they were to be on dry land again!