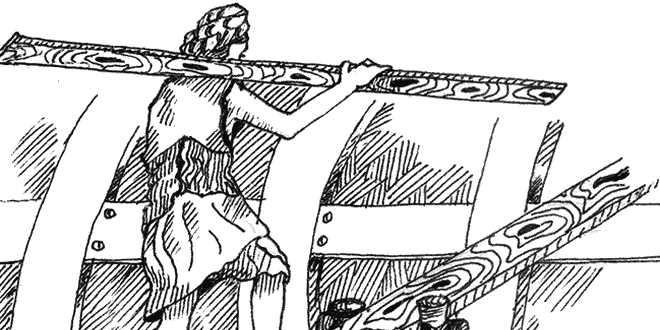 Stories from the Bible, Noah always tried to do what God wanted him to do…

But there was one man who loved God. He and his family obeyed God. This man was Noah. Noah always tried to do what God wanted him to do. God spoke to Noah one day and said, “Noah, I am going to destroy all the people on the earth. I will send rain for forty days and nights. All the earth will be covered with water. But Noah, because you love me and try to obey me, I will not destroy you and your family.”

Then God said: “I want you to build an ark. You must build it like I tell you. Before it begins to rain, take your wife and your three sons and their wives into this houseboat. I also want you to take two of some kinds of birds and animals into the ark. Take seven pairs of the animals and birds which men use most. You must also take plenty of food for all the people and animals.”

God gave Noah the exact measurements that he should use when building the ark. Noah went to work at once. He followed the plan God had given him. When the people who lived nearby saw Noah and his sons building the ark, they laughed. “Look at Noah. Isn’t he silly to build such a big boat on dry land?” they said to one another as they watched.

It took a long time to finish, but Noah and his sons worked and worked. At last, the big houseboat was ready. It was very long and three stories high. There was room for Noah, his wife, his three sons, and their wives. There was room for all the animals and birds that God had told to take into the ark with him.

Then one day the sky grew dark. God told Noah that it was time to go into the ark. Noah did as he was told. He and his family went into the ark. They led all the birds and animals into the ark as God had asked. When they were all safely inside, God shut the door of the houseboat.