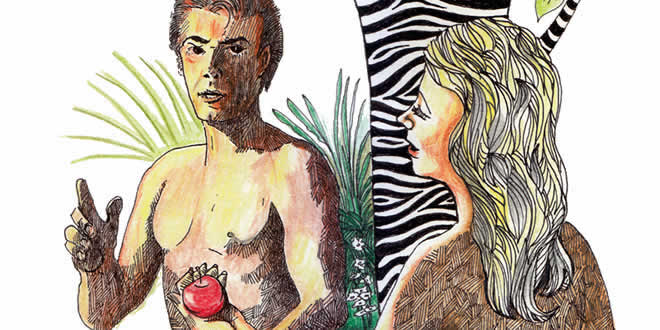 Later that day, Jehovah spoke to Adam and Eve. He asked them why they had disobeyed him.

Adam and Eve disobey God: One day while Eve was walking in the Garden of Eden, she passed the Tree of Knowledge.

An evil serpent in the tree spoke to her.

“Eve, tell me, can you eat fruits from every tree in the garden?” Eve said to the serpent, “we may eat the fruits of any tree but not from this tree, for God says, if we eat the fruits from the Tree of Knowledge we will surely die.”

To this serpent said, “No, you will not die. God does not want you to eat this fruit only because it will make you like God himself, knowing good from evil.”

The evil serpent saw that Eve was confused, so he tempted her even more.

“Take a bite, Eve. See how good it tastes!” Eve did not want to make serpent angry, so she took a bite and found that indeed it was very good. She ran to Adam saying, “Adam taste this fruit, it is very good!”

Adam then tasted the fruit.

Suddenly things seemed different. They realized that they were naked; and they were ashamed. They tried to hide themselves deep in the garden, but God saw them and called to them.

“Adam and Eve, you have disobeyed me by eating the fruit from the Tree of Knowledge.” God then told Adam and Eve that because of their sin they must leave the beautiful Garden of Eden.

From that day on they would have to earn their food by working hard for it. Worst of all, he told Adam and Eve the because of them, man would not live forever and would die like other creatures.

God also punished the evil serpent for tempting them. He made him crawl on his belly in the dust forever.