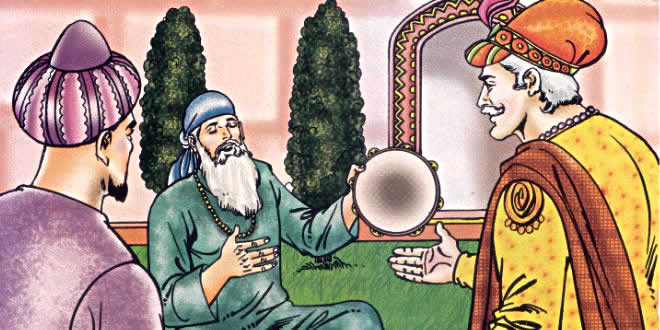 Singing Fakir: Tale of Birble in the guise of a fakir

Once an unknown fakir (saint) came wandering to the Emperor’s palace and sat on the parapet. He was praying and singing. Hours passed, but he showed no signs of leaving the place. The servants asked him to leave the palace but he did not listen to them. Since he was a fakir, it was not possible to apply force to drive him out of the palace. The servants were thinking of how to get rid of him. In the meantime, the Emperor arrived in the palace and politely requested the fakir, “Oh holy sir! This is a palace and not a dharamshala. You are mistaken if you think that you can sit anywhere you think suitable and start meditating.”

The fakir looked at the Emperor and asked coolly, “Your Majesty, who occupied this palace before you?”

“First it was my grand father,” Emperor Akbar replied. “Afterwards my father occupied this palace and now I live here. And after me, by God’s grace, my sons, and my grand sons too will stay here.”

“Hmm, so!” the fakir exclaimed. “This means one person comes and the other goes. Then isn’t this a dharamshala? This world too is like a dharamshala. We all are like guests. We stay here for a while and then go away. After that other people arrive in this world to stay. So, it is quite meaningless to say that this is my house and that is yours! You are foolish indeed to boast that this is your palace!”

The Emperor was speechless with the fakir’s explanation. The fakir was really very knowledgeable. Just then the fakir removed his false beard and disguise. In fact, it was Birbal in the guise of a fakir. The Emperor was very pleased with Birbal and praised him open heartedly.