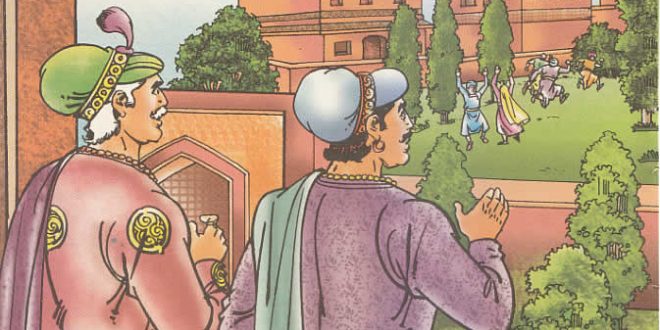 Dark Below The Lamp: Moral Story From Akbar Birbal

Dark Below The Lamp: Once, the Emperor and Birbal were sitting in the palace balcony and watching the sunrise. The sunrays falling on the sparkling waters of the Yamuna river gave it a golden sheen. The Emperor used to watch this natural beauty everyday.

Suddenly, their attention was diverted due to a loud noise. They noticed some thieves running after looting some travellers. The poor travellers were crying in grief.

The Emperor ordered his guards to catch the thieves but the thieves had already disappeared. The guards returned empty handed.

The Emperor was furious to see the soldiers coming back empty handed. Nothing could have been worse than the incapability of the royal guards in capturing the thieves who had robbed the passers-by near the palace itself.

The Emperor was terribly frustrated at this. He asked Birbal, “Birbal, all this has happened because our administration is not efficient. Isn’t it a matter of shame? A common man is being robbed in front of the Emperor and the Emperor is incapable of doing anything in this regard; why is it so?”

Birbal said, “Your Majesty, though a lamp spreads light all around, but it is always dark under the lamp.”

The Emperor was very much pleased with Birbal’s reply. He compensated the travellers by giving them money and clothes etc. He also sent armed guards to escort them to their homes safely.

Previous Singing Fakir: Tale of Birble in the guise of a fakir
Next Quotes about Population For Students