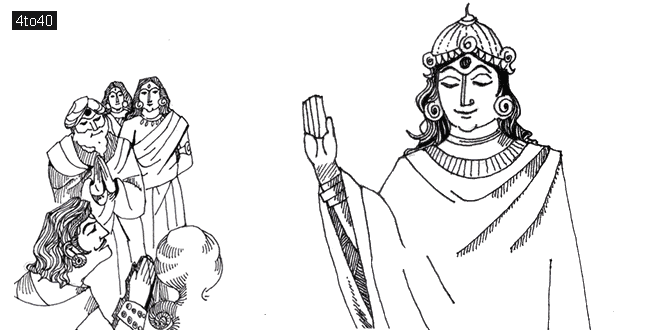 The story of the ‘Mahabharata’ is about the Pandavas and the Kauravas.

House of Lac: Classic Tale From Mahabharata – The five Pandava brothers, Dharmaputra, Bhima, Arjuna, Nakula and Sahadeva, were the sons of Pandu, the King of Hastinapura. The Kauravas were the one hundred sons of Dhritarashtra, Pandu’s elder brother. Dhritarashtra was blind. The people did not want a blind man to be their king. So Pandu was chosen king instead.

Pandu was a great ruler. He ruled the country well and the people loved him very much. But Pandu’s rule did not last long. He died when his children were still young . So Dhritarashtra took charge of Pandu’s children and acted as king till they grew up.

As the Pandavas and the Kauravas grew older, their hatred and bitterness towards each other also grew. The Kauravas were jealous of the strength and fights between them. But the Pandavas always won. Duryodhana, the eldest of the Kauravas, hated the Pandavas most. Bhima was his chief rival and he hated Bhima more than anyone else.

The princes at last came of age. Dhritarashtra knew that he must now choose an heir to the throne. He longed to choose Duryodhana, his own eldest son, whom he loved very much. But he thought that would not be right, and he knew the people would not approve of it. So he decided to choose Dharmaputra, the eldest of the Pandavas, as king.

Duryodhana and his brothers were angry. They knew that the Pandavas had the right to the throne and that the people loved the were impatient at the delay in crowing Dharmaputra. Yet the Kauravas decided to prevent the Pandavas from getting the throne. They consulted their uncle Shakuni. Shakuni was the most wicked man that ever lived. He hated the Pandavas and wanted to help his nephews. The Kauravas and Shakuni went to the old king and pleaded that Duryodhana should be chosen king.

Duryodhana said: “Father, you are now the King. The King has the right to choose his successor. It is true the people want Dharmaputra to be the King. But they are fools. They do not know what they are saying. If Dharmaputra is made King, where shall we go? What will become of the Pandavas even for food. It is far better to die than to be the slaves of the Pandavas.”

“What you say is true,” said Dhritarashtra. “But Dharmaputra is a good man. He loves everyone. He has a claim to the throne. The people know that and they will not forgive me if I make a wrong choice.”

Duryodhana replied: “You have nothing to fear. The leaders of the army and all the elder statesmen are on our side. Send the Pandavas to some distant place for a while. When they are gone we can make our side stronger. We shall get the goodwill of the people and more people will be true to us. Send the Pandavas to Varanavata. Tell them the people of that place want them to go there.”

The Pandavas felt that there was a hidden reason for sending them away. But they would not disobey Dhritarashtra. They agreed to go.

Duryodhana was happy that the Pandavas were going away. But he did not want them to come back. He talked to Shakuni and between them they formed a plan.

Duryodhana called his faithful servant, Purochana, and said: “The Pandavas are going to Varanavata. I want them all to die there. You must go immediately to Varanavata and build a palace for the Pandavas. The palace should be built of lac, wax and other material which will quickly go up in flames when it is set fire. Cover the walls with plaster and get beautiful pictures painted on them. Spend any amount of money. Nobody must suspect anything. When the Pandavas reach there, you must stay with them. At a proper time, set fire to and see that not one of them escapes.”

Purochana promised to do his best and left for Varanavata. He built a palace just as Duryodhana wanted. He then waited for the Pandavas to come.

The Pandavas and their mother, Kunti, left Hastinapura for Varanavata. Because the people loved them, they followed them, but the Pandavas told them to return to their homes. They promised to come back as soon as they could. On the way, Vidura, their wise uncle, warned them that there might be danger to their lives from fire. They must be careful.

The Pandavas arrived in Varanavata and people there received them with great joy. Purochana met them and took them to the new palace. The Pandavas found it very beautiful, but they soon learnt that it was a fire trap. They pretended not to notice anything and began to live ther. Shortly after, a messenger arrived from Vidura. He told the Pandavas that Vidura had sent him to help them. He said he would make a long underground tunnel from the palace to a safe place in a forest far away. If the palace were set on fire, the Pandavas could escape through this tunnel. The Pandavas gladly accepted his suggestion. They worked day and night and the tunnel was ready in a few months.

The Pandavas spent their time hunting and merry-making. But always they knew there might be danger.

Purochana stayed in a room near the gate of the palace. He was on guard to see that the Pandavas did not escape. He was waiting for a good time to set fire to the palace.

Bhima, the strongest among the Pandavas, and Arjuna, the cleverest, were always alert, watching the movements of everyone who come near the palace. They were on the look-out for any visitor who might set it on fire.

A year passed and the Pandavas felt that Purochana would act soon. So they decided to act first. One night they themselves set fire to the palace and escaped through the tunnel. Purochana, caught unawares, was burnt to death. The whole building crumbled to ashes in no time.

The people of Varanavata thought that the Pandavas and their mother had died in the big fire. They were filled with grief at losing their beloved princes.

News reached Hastinapura that the Pandavas had been burnt to death by accident in a fire. Old King Dhritarashtra suffered great sorrow. The Kauravas were very happy, but they pretended they were very sorry.

The Pandavas and their mother reached the forest through the tunnel. They decided to travel in disguise until they got back to Hastinapura.