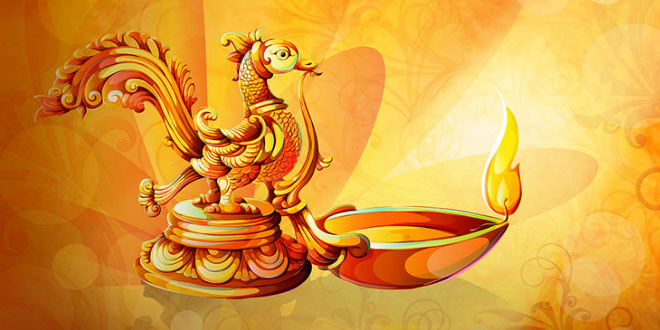 Story of Diwali Festival And Diwali Legends – India, the land of rich cultural heritage, has one or the other festival for every month. It is the spiritual and religious richness in India that each festival is related to some or other deity. One of such festival is the ‘festival of lights’ – Deepawali. It is the glorious occasion that is not restricted to one day, but extended to a five-day celebration. All through these five days, people are in a festive mood. Adding to the festivity is the colorful display of lights. Like every other Hindu festival, stories from Mythology are associated with Diwali too. Given below is information on the celebrations of Diwali.

Return of Shri Ram To Ayodhya: Story of Diwali Festival

The most famous legend behind the celebrations of Diwali is about the prince of Ayodhya Nagri – Lord Shri Ram. The king of Lanka, Ravana, kidnapped Ram’s wife – Sita from the jungle, where they were staying as per the instructions of King Dashratha, father of Lord Ram. In order to freed Sita from Ravana’s custody, Ram attacked him. This was followed by a war, in which, Ram defeated Ravan and released Sita from his custody. On the arrival of Lord Ram along with his wife Sita, people of Ayodhya decorated their homes as well as the city of Ayodhya by lighting tiny diyas all over, in order to welcome their beloved prince Shri Ram and Devi Sita.

On the auspicious new moon day, which is ‘Amavasyaa‘ of the Hindi month of Kartik, the Goddess of wealth and prosperity – Lakshmi was incarnated. She appeared during the churning of the ocean, which is known as ‘Samudra Manthan‘, by the demons on one side and ‘Devataas‘ (Gods) on the other side. Therefore, the worship of Goddess Lakshmi, the Lakshmi Pujan, on the day of Diwali, became a tradition.

One famous story behind the celebrations of Diwali is about the demon king Narakasur, who was ruler of Pragjyotishpur, a province to the South of Nepal. After acquiring victory over Lord Indra during a war, Narakasur snatched away the magnificent earrings of Mother Goddess Aditi, who was not only the ruler of Suraloka, but also a relative of Lord Krishna’s wife – Satyabhama. Narakasur also imprisoned sixteen thousand daughters of Gods and saints in his harem. With the support of Lord Krishna, Satyabhama defeated Narakasur, released all the women from his harem and restored the magnificent earrings of Mother Goddess Aditi.

The Return of The Pandavas

The great Hindu epic ‘Mahabharata‘ has another interesting story related to the ‘Kartik Amavasyaa‘. According to the story, ‘the Pandavas’, the five brothers Yudhishthhira, Bhima, Arjuna, Nakula and Sahdeva, were sentenced to thirteen years exile as a result of their defeat against ‘the Kauravas’ – Duryodhana and his ninety nine brothers, at the game of dice. Therefore, the Pandavas spent thirteen years in the jungles and returned to their kingdom on the day of ‘Kartik Amavasyaa‘. On their return, the people of their kingdom welcomed the Pandavas by celebrating the event by lighting the earthen lamps all over in their city.

Another legend or story about Diwali celebrations relates to one of the greatest Hindu King – Vikramaditya. It was the day when he was coroneted and the people celebrated this event by lighting tiny earthen ‘diyas‘.