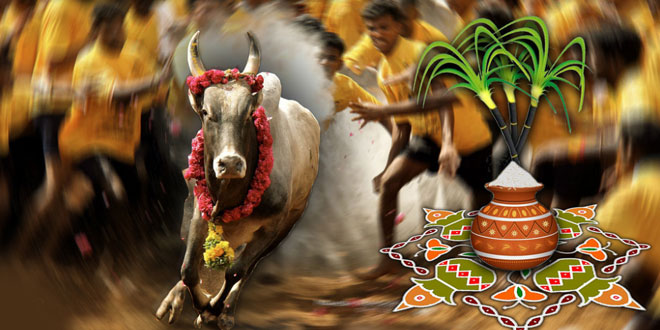 The festival of Pongal is celebrated with zeal and fervor by the Tamilians in India as well as in any part of the world they reside. As this harvest festival is considered very auspicious, even the Tamils living abroad celebrate this festival with the wish of prosperity as well as for keeping their cultural ties with their native place alive. It is interesting to note that not only the elderly or middle aged section of the Tamil population but also the even younger generations of Tamils living abroad participate in this harvest festival with equal zeal. Through this celebration, they maintain and nurture the cultural distinctiveness despite being in an alien land. Occasions like Pongal also help in bonding of the Tamil community living in other parts of the world.

With the presence of Tamil population all over the world, Pongal has become a globally celebrated festival. Tamilians are spread over fifty countries of the world. Countries like Mauritius, Jamaica, Trinidad, Guyana, Suriname, Malaysia, Sri Lanka, Indonesia, Thailand and Britain have a large chunk of Tamil population. For the Tamilians living outside their native land, this celebration is of immense importance as it means connecting to their own roots and culture. Read on to explore more about the celebrations of Pongal around the world.

Pongal due to the Indian connection is celebrated with high regards in various countries of South East Asia where there is a size-able Tamil population. In countries like Indonesia, Singapore, Malaysia and Myanmar, the festival of Pongal is one of the biggest Hindu festivals celebrated on a national scale. There are umpteen numbers of Hindu temples are spread over in these small and diverse immigrant countries. Very much like their Indian counterparts, Tamils in the other parts of South Asia celebrate a four day long festival. The festival begins with the morning ritual of cooking rice in new pots. Offering vegetables, sugar cane and spices to Gods is also popular at these places. Dance and Music specially meant for Pongal are a vital part of the celebrations here.

In Africa, the Pongal celebrations are most visible in the Mauritius. There are about 250 temples in Mauritius and Pongal is celebrated on a national level as it is declared public holiday in the country. About 120,000 Tamils celebrate this festival in Mauritius. Here, the Seychelles Hindu Kovil Sangam and Navasakthi Vinayagar temple have acted as vital forces in reuniting the Tamil community. Even, in South Africa, the Pongal celebrations are aesthetic and traditional.

Even in the countries like Australia, New Zealand, Fiji, Pongal is celebrated by the existing Tamil community with zeal and fervor. Though, the celebrations are not very traditional as their Indian counterparts, the efforts to relate to their cultural ties are indeed praiseworthy on these alien lands. The festival is celebrated here in the existing temple and is organized by the local official Tamil committees and organizations.

Pongal in the Gulf

In the Gulf counties like Bahrain, Qatar, UAE, Saudi Arabia and Kuwait, the Pongal celebrations are basically organized for creating fondness amongst the Hindu people living over there. In Oman and Dubai, the celebrations have reached a praiseworthy level. The recent migrations of Tamils in these places have given boost up to the existing Pongal celebrations of the place.

Pongal celebrations in Europe are visible in countries like Britain, France, Germany, Italy, Switzerland and Denmark. In Britain and France, Hindu temples organize the Pongal celebration for the Tamil community. Generally, like other foreign countries, Pongal here is more of a community festival in order to create a sense of relation in the existing Tamil Diaspora.