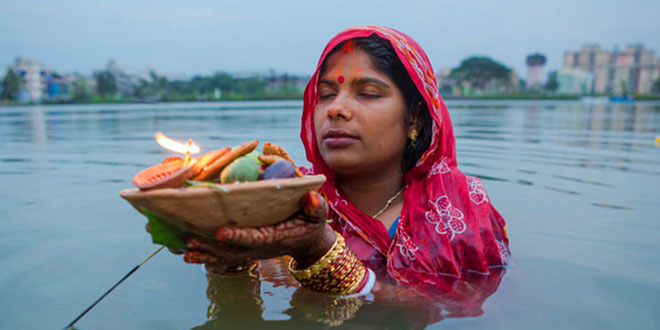 Four Days Of Chhath Puja: Chhath Puja is a major festival which is celebrated in Northern India a few days after the Festival of Light, Diwali. The festival of Chhath Puja revolves around worshiping the Sun God and following a strict regimen of fasting and penance. Sun is a symbol for life hence the worshipers pray to both the setting and the rising sun; the setting sun thus meaning death and the rising sun meaning the rebirth. Many northern states of India have temples with ponds dedicated especially to the Sun God where the rituals related to this festival are conducted. The prime worshipers on this festival are women but a number of men too take part in the festivities. The festivities go on for four days and these days are called the four days of Chhath Puja.

The first day on which festivities start is called Naha Kha, which literally means to bathe and eat. On this day, devotees go to a sacred river in their place and take a dip in the river, hence completing the first part of the ritual, snanam or bathing. Later on, devotees take home some water from the holy river to prepare offerings for the day. Preparations need to be done before the offerings are prepared. The house and compound nearby is conscientiously cleaned. The person who is fasting on this day, Parvaitins, is supposed to meal once this day.

On Pancahami, the fifth day according to the Hindu solar calendar, the Parvaitins observe fast for the complete day. They are not supposed to eat anything before the sunset. Just after sunrise, Mother Earth is worshiped and the offerings which comprise of Rasiao-kheer, puris, and bananas are distributed among the friends and relatives. After this, the Parvaitins break bread. From this time the Parvaitins go on a fast for the next 36 hours not even drinking a single drop of water.

The day is divided into to main parts which are called by two separate names depending on the time of the day these rituals are performed at.

The offerings given to the sun in the morning are called Bihaniya Aragh. The Parvaitin and the family members visit the bank of the sacred river before the sunrise to make offerings to the rising sun. The festival is concluded after the Parvaitins break their fast and the Prasad is distributed among the friends and family who visit the home of the Parvaitins.

The tradition is performed and followed by great reverence and after the festival is finished Prasad, consisting of sweets and fruits, is given to friends in small bamboo winnows. Emphasis is on purity of food, as no onions, garlic or table salt is used in the preparation of the Prasad.