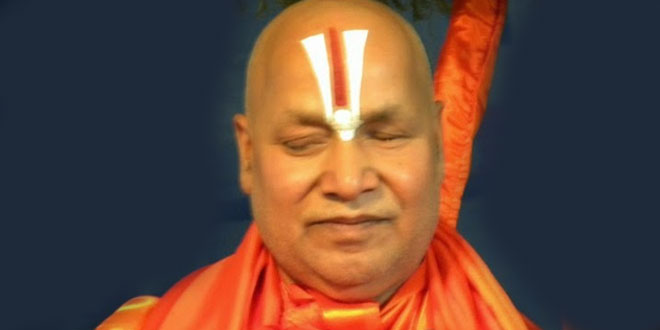 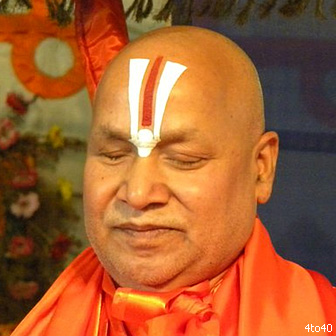 Rambhadracharya can speak 22 languages and is a spontaneous poet and writer in Sanskrit, Hindi, Awadhi, Maithili, and several other languages. He has composed more than 90 works, including four epic poems, a Hindi commentary on Tulsidas‘ Ramcharitmanas, a Sanskrit commentary in verse on the Ashtadhyayi, and Sanskrit commentaries on the Prasthanatrayi scriptures. He is regarded as one of the greatest authorities on Tulsidas in India, and is the editor of a critical edition of the Ramcharitmanas. He is a Katha artist for the Ramayana and the Bhagavata. His Katha programmes are held regularly in different cities in India and other countries, and are telecast on television channels like Sanskar TV and Sanatan TV.

Jagadguru Rambhadracharya was born in a Saryupareen Brahmin family of the Vasishtha Gotra (lineage of the sage Vasishtha) in Shandikhurd village in the Jaunpur district, Uttar Pradesh, India. He was born at 10:34 pm on Saturday, 14 January 1950 (Magha Krishna Ekadashi), during the Makar Sankranti festival, under the Anuradha constellation. Born to mother Shachidevi and father Pandit Rajdev Mishra, he was named Giridhar by his great aunt, a paternal cousin of his paternal grandfather, Pandit Suryabali Mishra. The great aunt was a devotee of Mirabai, a female saint of the Bhakti era in medieval India, who used the name Giridhar to address the God Krishna in her compositions.

Giridhar lost his eyesight at the age of two months. On 24 March 1950, his eyes were infected by trachoma. There were no advanced facilities for treatment in the village, so he was taken to an elderly woman in a nearby village who was known to cure trachoma boils to provide relief. The woman applied a paste of myrobalan to Giridhar’s eyes to burst the lumps, but his eyes started bleeding, resulting in the loss of his eyesight. His family took him to the King George Hospital in Lucknow, where his eyes were treated for 21 days, but his sight could not be restored. Various Ayurvedic, Homeopathic, Allopathic, and other practitioners were approached in Sitapur, Lucknow, and Bombay, but to no avail. Rambhadracharya has been blind ever since. He cannot read or write, as he does not use Braille; he learns by listening and composes by dictating to scribes.

Jagadguru (Samskrta, literally the preceptor of the world), is a term used in the Sanatana Dharma used for somebody who possesses complete knowledge and understanding of Vedic scriptures. The term has traditionally been conferred upon Acaryas of Vedanta who composed Samskrta commentaries on the three principal scriptures of Vedanta (also called the Prasthanatrayi) – the Brahma Sutra, the Bhagavad Gita and the principal Upanisads). In medieval history, there were six such Acaryas who were bestowed with the title of Jagadguru – Sankaracarya, Nimbarkacarya, Ramanujacarya, Madhvacarya, Ramanandacarya and Vallabhacarya. After Vallabhacarya, the Jagadguru tradition in Vedanta was lost – nobody wrote Samskrta commentaries on the Prasthanatrayi for the next five centuries.

Rambhadracharya enjoys wide popularity in the Chitrakoot region. Atal Behari Vajpayee, the former prime minister of India, considered Rambhadracharya to be an “immensely learned person well versed in Vedic and Puranic literature besides the grammar”, and commended his intelligence and memory. Dr. Murli Manohar Joshi, a leader of the Bharatiya Janata Party who was present at the inauguration of Kanch Mandir, said of Rambhadracharya that the “intense knowledge of the most revered is indeed adorable”. Nanaji Deshmukh, social activist and former leader of Bharatiya Jana Sangha, called Rambhadracharya “an astonishing gem of the country”. Swami Kalyandev, a social activist and Padma Bhushan awardee, considered Rambhadracharya to be “an unprecedented intellectual and speaker, and an Acharya with great devotion”. Somnath Chatterjee, former Speaker of Lok Sabha and leader of the Communist Party of India (Marxist), called him a “celebrated Sanskrit scholar and educationist of great merit and achievement”. He is considered one of the greatest scholars on Tulsidas and Ramcharitmanas in India, and is cited as such. Rambhadracharya has been associated with Rajnath Singh, a leader of the Bharatiya Janata Party, who, as the Chief Minister of Uttar Pradesh, was one of the first promoters of the Jagadguru Rambhadracharya Handicapped University. He was presented with an honorary D Litt. by Rambhadracharya on the third convocation of the university in 2011. Former Uttar Pradesh chief minister Ram Prakash Gupta and former speaker of the Uttar Pradesh legislative assembly Keshari Nath Tripathi said that he will continue to enrich society with his contributions. Swami Ramdev considers Rambhadracharya to be the most learned person in the world at present.

In 1992 Rambhadracharya led the Indian delegation at the Ninth World Conference on Ramayana, held in Indonesia. He has travelled to several countries, including England, Mauritius, Singapore, and the United States to deliver discourses on Hindu religion and peace. He has been profiled in the International Who’s Who of Intellectuals.

Rambhadracharya was one of the spiritual and religious Gurus from India at the Millennium World Peace Summit, organised by the United Nations in New York City from 28 to 31 August 2000. While addressing the gathering, he gave Sanskrit definitions for the words Bharata (the ancient name of India) and Hindu, and touched upon the Nirguna and Saguna aspects of God. In his speech on Peace, he called for developed and developing nations to come together to strive for the eradication of poverty, the fight against terrorism, and nuclear disarmament. At the end of his speech, he recited the Shanti Mantra.

Rambhadracharya has been honored by several leaders and politicians, including A. P. J. Abdul Kalam, Somnath Chatterjee, Shilendra Kumar Singh, and Indira Gandhi. Several state governments, including that of Uttar Pradesh, Madhya Pradesh, and Himachal Pradesh have conferred honours on him.