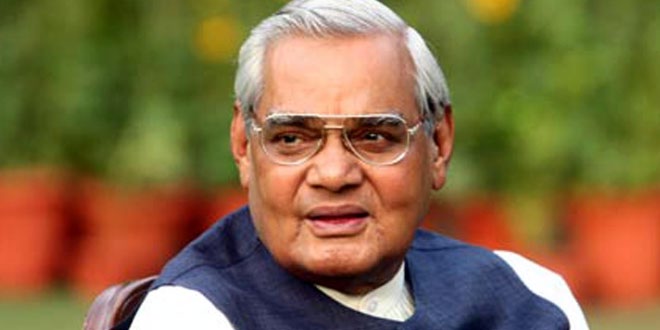 Atal Bihari Vajpayee (born 25 December 1924) is an Indian statesman, who served as the tenth Prime Minister of India thrice – including brief first term in 1996 and two terms from 1998 to 2004. After a brief stint as Prime Minister in 1996, Vajpayee headed a coalition government from 19 March 1998 until 19 May 2004. A veteran Parliamentarian whose career stretches over four decades, Shri Vajpayee has been elected to the Lok Sabha (House of the People) nine times and to the Rajya Sabha (House of the States) twice, a record by itself. He served as a Member of Parliament (MP) from Lucknow until 2009, and has since retired from active politics, possibly due to ill-health.

Even his detractors cannot help appreciating him for his statesmanship and look upon him as one of the stalwarts of Indian politics. The moderate face of BJP, Atal Bihari Vajpayee, is known for his balanced and well-thought out views. A man of the masses, Vajpayee’s leadership as the head of the NDA, gave a new meaning to the concept of coalition government in India. His bus journey to Pakistan in February 1999 was widely acclaimed for starting a new era of negotiations to resolve the outstanding problems of the sub-continent. Well known and respected for his love for poetry and as an eloquent speaker, Vajpayee brings with him a long parliamentary experience spanning over four decades. A founder-member of the erstwhile Jana Sangh (1951), and an MP since 1957, what’s amazing is that Vajpayee is the only parliamentarian elected from four different states at different times, namely Uttar Pradesh, Gujarat, Madhya Pradesh and Delhi. Conferred with a Padma Vibhushan in 1992, Vajpayee is a man of literature and loves to pen a few lines when he is at leisure like Meri Sansadiya Yatra, Meri Ikkyavan Kavitayen, Amar Aag Hai…

Vajpayee has an adopted daughter, Namita. He is fond of Indian music and dance. He loves nature and one of his favorite retreats is Manali in Himachal Pradesh.

Vajpayee underwent knee replacement surgery at Breach Candy Hospital in Mumbai in 2001. He suffered a stroke in 2009 which impaired his speech. His health has been a major source of concern and those in the know say he is often confined to a wheelchair and fails to recognize people. He is said to be suffering from dementia and long-term diabetes. He is not known to have attended any public event in recent years. He rarely ventures out of the house, except for checkups at the All India Institutes of Medical Sciences.

On 11 June 2018, Vajpayee was admitted to a hospital in critical condition.

Former PM Atal Bihari Vajpayee (and then Minister of External Affairs), in 1977, addressed the United Nations in Hindi for first ever time.