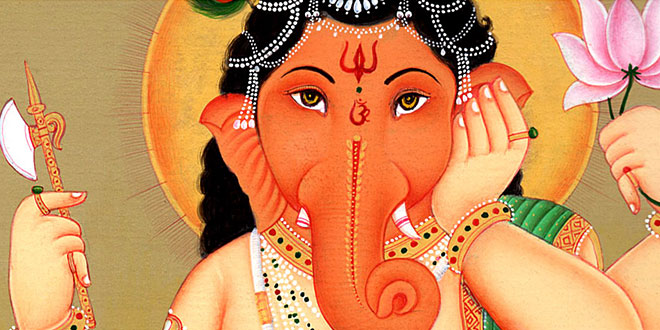 How did Lord Ganesha obtain his Elephant Head? STORY – 1

story is probably the one taken from the Shiva Purana. Once, while his mother Parvati wanted to bathe, there were no attendants around to guard her and stop anyone from accidentally entering the house. Hence she created a boy’s idol out of turmeric paste which she prepared to cleanse her body (turmeric was used for its anti-septic and cooling properties) and infused life into it, and thus Ganesha was born. Parvati ordered Ganesha not to allow anyone to enter the house and Ganesha obediently followed his mother’s orders. After a while Shiva returned from outside and as he tried to enter the house, Ganesha stopped him. Shiva was infuriated at this strange little boy who dared to challenge him. He told Ganesha that he was Parvati’s husband, and demanded that Ganesha let him go in. But Ganesha would not hear any person’s word other than his dear mother’s.

Shiva lost his patience and had a fierce battle with Ganesha. At last he severed Ganesha’s head with his Trishula (trident). When Parvati came out and saw her son’s lifeless body, she was very angry and sad. She demanded that Shiva restore Ganesha’s life at once. Unfortunately, Shiva’s Trishula was so powerful that it had hurled Ganesha’s head very far off. All attempts to find the head were in vain. As a last resort, Shiva approached Brahma who suggested that he replace Ganesha’s head with the first living being that came his way which lay with its head facing north. Shiva then sent his celestial armies (Gana) to find and take the head of whatever creature they happened to find asleep with its head facing north. They found an elephant which slept in this manner and decapitated it, attaching the elephant’s head to Ganesha’s body and bringing him back to life. From then on, he was called Ganapathi, or head of the celestial armies and was to be worshiped by everyone before beginning any activity.

How did Lord Ganesha obtain his Elephant Head? STORY – 2

The Gaze of Shani

A less well-known story from the Brahma Vaivarta Purana narrates a different version of Ganesha’s birth. On the insistence of Shiva, Parvati fasted for a year (punyaka vrata) to propitiate Vishnu so that he would grant her a son. Lord Krishna, after the completion of the sacrifice, announced that he would incarnate himself as her son in every kalpa (eon). Accordingly, Krishna was born to Parvati as a charming infant. This event was celebrated with great enthusiasm and all the gods were invited to take a look at the baby. However Shani (Saturn), the son of Surya, hesitated to look at the baby since Shani’s gaze is said to be harmful. However Parvati insisted that he look at the baby, which Shani did, and immediately the infant’s head fell off and flew to Goloka. Seeing Shiva and Parvati grief stricken, Vishnu mounted on Garuda, his divine eagle, and rushed to the banks of the Pushpa-Bhadra river, from where he brought back the head of a young elephant. The head of the elephant was joined with the headless body of Parvati’s son, thus reviving him. The infant was named Ganesha and all the Gods blessed Ganesha and wished Him power and prosperity.