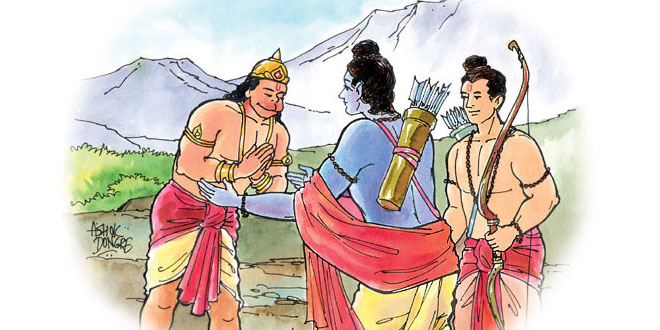 Hanuman met Rama and his brother Lakshmana while Rama was in exile in the jungle, and searching for his wife Sita who was abducted by Ravana. Their quest brought them near Pampa Lake at the foot of Mount Rishyamukha (in Koppal district near Hampi in Karnataka), where the monkey king Sugriva and his ministers were hiding. Sugriva, who was being persecuted by his brother Bali, suspected that Rama and Lakshmana might have been sent by Bali to slay him. To find out the facts, Hanuman approached them in the guise of a Brahmin.

As we all know, whenever humankind needed a savior, Lord Vishnu took on different forms or incarnations and came to the earth to save us. Lord Rama was one such form of Lord Vishnu. One day, Lord Shiva was very curious to see Lord Vishnu in this new form. This made him take on the disguise of a monkey trainer or Madari. Back then, Rama was the son of Dashrath and a crowned prince himself. So, Lord Shiva (as the Madari) decided to go straight to the court to perform. The monkey that Lord Shiva had with himself was none other than Hanuman, the son of Anjana. Knowing that it was the omnipotent Lord Shiva that we are talking about, Anjana happily gave her child in his custody. Lord Rama was thoroughly impressed by this particular incident and wished for the monkey for himself. Lord Shiva complied. Following that day, Hanuman was a companion to Rama for the rest of his childhood. Later, when Rama went to Vishwamitra’s gurukul, Hanuman left Ayodhya and joined the services of Vali and Sugriva of Kishkinda.

They Meet In Kishkindha

Following losing almost everything that was important to him in the famous incident of Sita haran, Lord Rama reached Kishkindha (This kingdom is identified to be the regions around the Tungabhadra river (then known as Pampa Saras) near Hampiand belongs to Koppal district, Karnataka.) along with his brother Lakshman in search of Sugriva. Sugriva’s agents saw the two brothers wandering about in their territory and, being loyal as he was, Hanuman was sent to find out more about them. In order to accomplish his purpose, Hanuman took on the form of a saint and requested the brothers to tell him more about themselves. On knowing the truth, Hanuman knew in an instant that all of Sugriva’s miseries were due to end and in an instant, he fell at the feet of Lord Rama. Later, in all humility, he took Lord Rama to the court of his king, Sugriva.