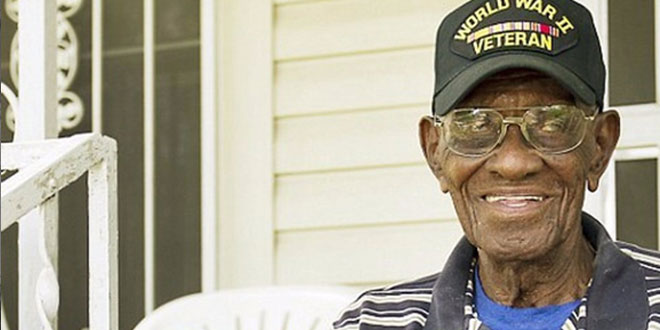 Photo: Richard Overton is World’s oldest living World War II veteran, and at age 111 he still drinks, smokes, and drives his own pickup.

The Guinness World Records world record for the Oldest World War I veteran was set by Antonio Todde (Italy) who served during World War I. Born 22 January 1889, he died on 4 January 2002 aged 112 years 346 days, surpassing the previous record held by John B. Salling of the US Confederate Army by 41 days.

Guinness World Records also recognized the world record for the Most decorated war veteran, set by Audie Murphy (1924–1971), who was the most decorated soldier in US history, winning 24 medals from the Congressional Medal of Honor down.

He spent his 111th birthday doing what he loves most: sitting out on his porch, cigar in hand, enjoying life.

The Austin, Texas, resident, who served in the Pacific from 1942 to 1945, was treated like a king as he turned another year older — and even got a street named after him.

Austin Mayor Steve Adler attended a lunch in Overton’s honor at the University of Texas Club in Austin where guests ate a birthday cake that read: “Happy 111th Birthday Pop!”

Last month, Overton showed up to the opening of a healing garden, named in his honor, with four cigars sticking out of his jacket pocket. “I’m glad you all take your time out to take up this much time with me,” he said.

Overton was born on a farm in Bastrop County, just outside Austin, in 1906. He enlisted in the Army during WWII and served in the all-black 1887th Engineer Aviation Battalion, according to the U.S. Department of Veterans Affairs.

He traveled to Iwo Jima, Guam, Hawaii and Okinawa, and worked as base security, a Jeep driver for a lieutenant, and did burial detail, according to the VA. While he saw enemy fire, he returned home without a scratch.

Back in Texas, he worked at a local furniture store and the Texas Department of the Treasury in Austin, where he remained until he was nearly 100 years old, according to the VA.

In 2013, he met President Barack Obama at the White House for breakfast before accompanying him to Arlington National Cemetery for a Veterans Day ceremony.

In December 2016, family, friends and admirers across the country rallied together to help Overton find the care he needed so he could stay in the home he built in 1945.