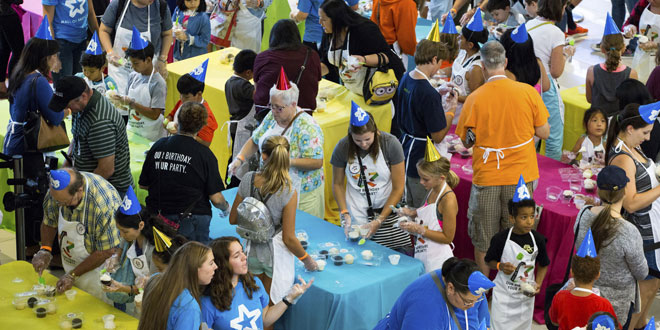 Most cupcakes iced in an hour

Photo: People decorate cupcakes in an attempt to beat a World Record for the most cupcakes iced in one hour during Mall of America’s 25th birthday celebration, in Bloomington, Minnesota.

“As we look ahead beyond our 25th birthday, we expect to include more entertainment in our retail mix, and continue to integrate digital tools to help enhance the guest’s stay,” said Greta Anderson, a spokeswoman for the mall. “We’ve succeeded in leading the retail and entertainment space for 25 years, and it’s been a great ride.”

The anniversary celebration included a one-of-a-kind cake from Bartolo “Buddy” Valastro of TLC’s reality television show “Cake Boss.” Valastro’s family-owned business, Carlo’s Bakery, is opening a location at the mall by the end of the year.

The mall’s attractions include an amusement park, an aquarium, an indoor zip line and a mirror maze.