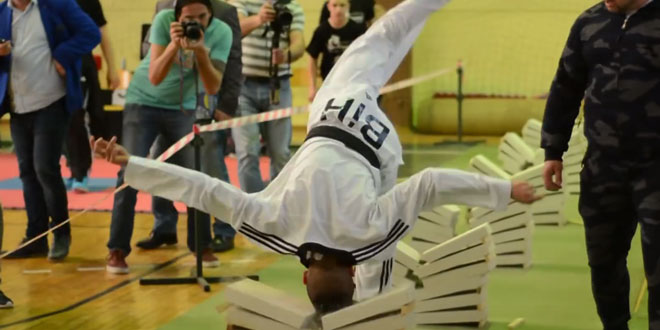 Most concrete blocks broken with the head

Visoko, Bosnia – March 29, 2017 – Kerim Ahmetspahic, a 16-year-old taekwondo champion from Bosnia, front-flipped over and over into the columns of blocks, breaking a total of 111 blocks with his head, thus setting the new world record for the Most concrete blocks broken with the head by forward flips in one minute.

Most concrete blocks broken with the head

Photo: Kerim Ahmetspahic, a 16-year-old Bosnian blackbelt in taekwondo, smashed 111 concrete blocks with his noggin in a mere 35 seconds.

Guinness World Records also recognized the world record for the heaviest concrete block break on a bed of nails; it is held by Neal Hardy (Australia) who had 15 blocks weighing 774.99 kg (1708 lb 8 oz) placed on his chest and broken at Petrie Plaza in Canberra, Australia, on 12 February 2012.

The previous Guinness world record-holder was only able to break 65 blocks in a minute.

Meanwhile, Ahmetspahic nearly doubled that record in almost half the time: 35 seconds.

A cheering crowd gathered in the Bosnian city of Visoko to witness the young champion polish off the challenge and erupted into cheers when he finished it in around 35 seconds.