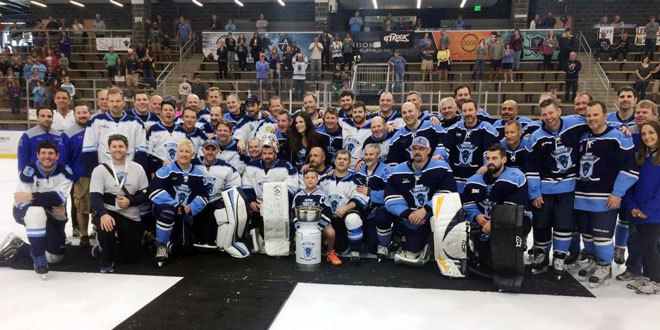 Photo: The new world record for the longest hockey game was set when the official time clock mounted in the stands overlooking center ice hit 10 days, 10 hours, 3 minutes and 21 seconds. The 11 Day Power Play raised more than one million dollars for cancer research.

The time surpassed the previous Guinness World Record mark of 250 hours, three minutes and 20 seconds established during an outdoor game outside of Edmonton in February 2015.

Fans stood, cheered and hollered, and play was stopped briefly as players hugged on the benches and on the ice. Team Blue was leading Team White 1,723-1,695 in an event dubbed the “11 Day Power Play”.

The world record event was organized a year ago by Mike Lesakowski, a 45-year-old environmental engineer. He was motivated to raise money for cancer research after his wife, Amy, was successfully treated for breast cancer at Roswell in 2009, and in honour of his mother who died of cancer last year.

The ice time was donated by the NHL’s Buffalo Sabres-owned two-rink HarborCenter hockey and entertainment complex. Numerous restaurants chipped in by donating meals. A group of athletic trainers and therapists also was on hand 24 hours a day to treat injuries, tape up blisters and provide massages.