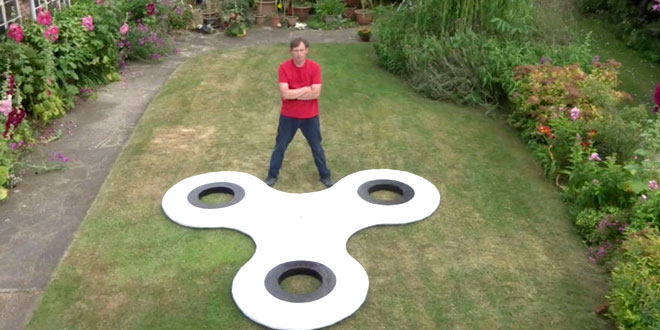 Ipswich, UK – June 30, 2017 – Tony Fisher, who made headlines last year when he broke the Guinness World Record for the world’s largest Rubik’s cube, unveiled his latest creation: a massive fidget spinner — which has a diameter of about 11 feet and sets the new world record for the Largest Fidget Spinner.

Photo: British inventor Tony Fisher made the world’s largest fidget spinner, which stands 2.8 meters tall with a diameter of over 3.3 meters (nearly 11 feet) and weights 20 kilograms.

The Guinness World Records world record for the Largest game of Minesweeper, set by the US video walls solution company CineMassive which crafted an epic game of Minesweeper that featured a playing board that measured 718 tiles x 262 tiles. In total there were 188,116 tiles infested with 38,799 mines to uncover and avoid.

Fisher shows the massive fidget spinner — which has a diameter of about 11 feet — actually functions like its smaller counterparts by picking it up and making it spin while he balances it on a hand.

Fisher made his huge fidget spinner using Celotex insulation board, bicycle wheel, Perspex, rolls of gaffer tape, long screws, and a custom made pair of compasses.

Tony Fisher, who made headlines last year when he broke the Guinness World Record for the world’s largest Rubik’s cube and spent two days solving the puzzle, posted a video showing his latest gigantic version of a trendy toy.

The fidget spinner is one of the most popular toys in the world today. It became popular because some claimed that it helped them reduce stress. The toy was originally marketed for people with ADHD, autism, or anxiety.