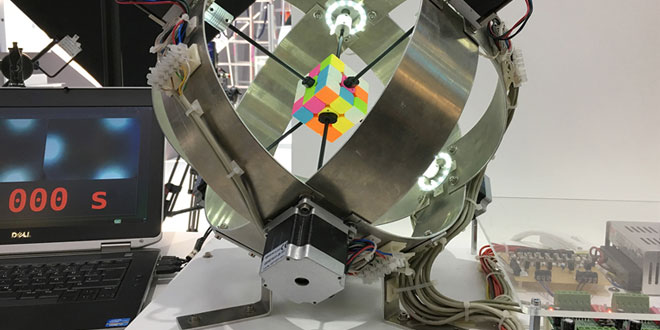 Munich, Germany – November 12, 2016 – A robot known as “Sub1 Reloaded” took just 637 thousandths of a second to analyse the Rubik’s cube and make 21 moves, so that each of the cube’s sides showed a single color, thus setting the new world record for being the Fastest robot to solve a Rubik’s cube.

The Guinness World Records world record for the fastest robot to solve a Rubik’s Cube is Sub1 with a time of 0.887 seconds, built by Albert Beer (Germany), and demonstrated at the Cubikon Store, in Munich, Germany, 23 January 2016.

The record attempt was staged at the Electronica trade fair in Munich.

That beats a previous Guinness World record of 887 thousandths of a second , which was achieved by an earlier version of the same machine using a different processor.

The Sub1 Reloaded robot, made by chipmaker Infineon , contains a microcontroller similar to the ones used in driverless cars, and a number of other microchips.

Every Rubik’s cube can be unscrambled with just 20 movements. A variety of algorithms can be used to solve the puzzle, the most well-known of which is the Fridrich Method.

But Infineon’s constructor Albert Beer did not design his prodigy with the fewest moves in mind. Rather, he was intent on achieving the best time – he even allowed the “Sub1 Reloaded” a few extra moves to reach this goal.