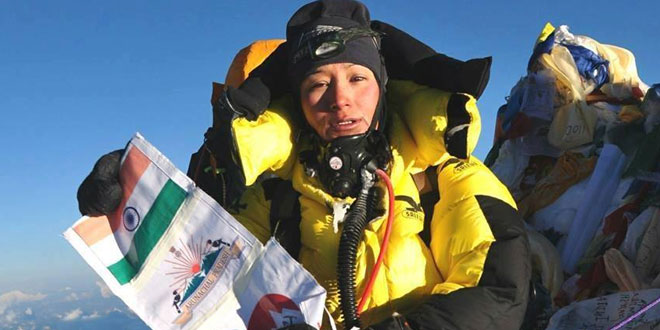 Fastest double ascent of Mount Everest by a woman

Kathmandu, Nepal – May 28, 2017 – Anshu Jamsenpa, 37 and the mother of two, has climbed Mount Everest twice in less than a week, thus setting the new world record for the Fastest double ascent of Mount Everest by a woman.

Photo: Anshu Jamsenpa has established a new women’s record for a double ascent of the world’s highest mountain in one season. On 21 May, Ms Jamsenpa reached the top of Mount Everest for the second time and stripped previous record-holder Chhurim Sherpa of the title. Ms Sherpa scaled the peak twice in a week in 2012 to claim the previous world record.

Guinness World Records also recognized the world record for the Most ascents of Everest by a woman, set by Lakpa Sherpa (Nepal, b. 23 September 1973), who reached the summit of Everest (8,848 m; 29,029 ft) for the seventh time on 20 May 2016, more times than any other female climber.

Anshu Jamsenpa, 37 and the mother of two, reached the 29,028-feet summit in Nepal on May 16 and five days later Sunday, tourism official Gyanendra Shrestha confirmed to BBC Nepali.

She reached the peak the second time at 8 a.m., Dawa Lama of Dream Himalaya Adventures confirmed to The Economic Times in India.