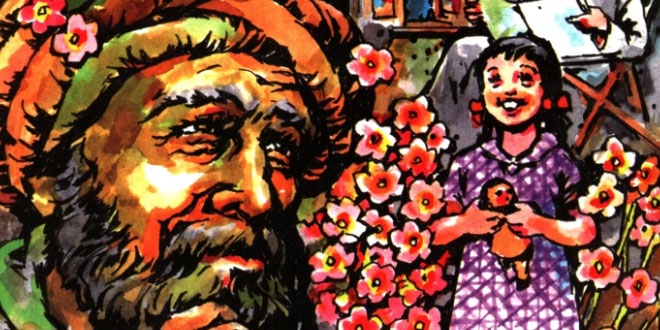 One morning, however, not many days later, as I was leaving the house, I was startled to find Mini, seated on a bench near the door, laughing and talking, with the great Kabuliwallah at her feet. In all her life, it appeared; my small daughter had never found so patient a listener, save her father. And already the corner of her little sari was stuffed with almonds and raisins, the gift of her visitor, “Why did you give her those?” I said, and taking out an eight-anna bit, I handed it to him. The man accepted the money without demur, and slipped it into his pocket.

Alas, on my return an hour later, I found the unfortunate coin had made twice its own worth of trouble! For the Kabuliwallah had given it to Mini, and her mother catching sight of the bright round object, had pounced on the child with: “Where did you get that eight-anna bit?”

“The Kabuliwallah gave it me,” said Mini cheerfully.

“The Kabuliwallah gave it you!” cried her mother much shocked. “Oh, Mini! how could you take it from him?”

I, entering at the moment, saved her from impending disaster, and proceeded to make my own inquiries.

It was not the first or second time, I found, that the two had met. The Kabuliwallah had overcome the child’s first terror by a judicious bribery of nuts and almonds, and the two were now great friends.

They had many quaint jokes, which afforded them much amusement. Seated in front of him, looking down on his gigantic frame in all her tiny dignity, Mini would ripple her face with laughter, and begin: “O Kabuliwallah, Kabuliwallah, what have you got in your bag?”

And he would reply, in the nasal accents of the mountaineer: “An elephant!” Not much cause for merriment, perhaps; but how they both enjoyed the witticism! And for me, this child’s talk with a grown-up man had always in it something strangely fascinating.

Then the Kabuliwallah, not to be behindhand, would take his turn: “Well, little one, and when are you going to the father-in-law’s house?”

Now most small Bengali maidens have heard long ago about the father-in-law’s house; but we, being a little new-fangled, had kept these things from our child, and Mini at this question must have been a trifle bewildered. But she would not show it, and with ready tact replied: “Are you going there?”

Amongst men of the Kabuliwallah’s class, however, it is well known that the words father-in-law’s house have a double meaning. It is a euphemism for jail, the place where we are well cared for, at no expense to ourselves. In this sense would the sturdy pedlar take my daughter’s question. “Ah,” he would say, shaking his fist at an invisible policeman, “I will thrash my father-in-law!” Hearing this, and picturing the poor discomfited relative, Mini would go off into peals of laughter, in which her formidable friend would join.