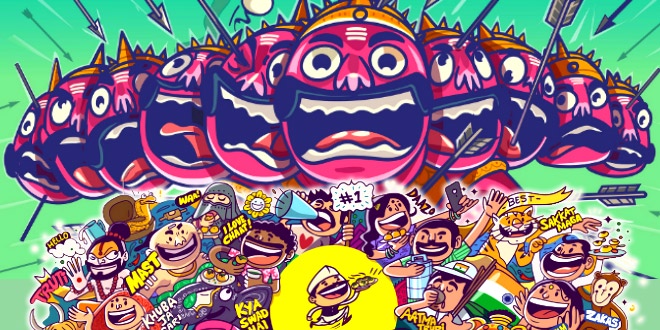 Unforgettable Dussehra: Dipu was in a mood to go around for some fun and enjoyment so he accompanied his brother along with their dog Romi to a nearby park. They spent some time playing with a ball when Dipu suddenly announced, “It is Dussehra today and we can go and watch burning of Ravan in the Dussehra ground.

We can also enjoy some snacks and chaat in the fair. I am eager to go but I am sure dad will not allow us to go alone”.

His brother Meetu laughed, “You are so timid… we have grown up now… I am in standard sixth and you are studying in class seventh. Don’t you think we have grown enough to take care of ourselves”?

“Yes… I think you are justified” Dipu felt confident.

“So it has been decided that all three of us will visit Dussehra fair in the evening”.

“But who is the third one?” Meetu asked.

“Romi of course. You know that Romi is my partner and he accompanies me everywhere.” Dipu replied.

Romi felt important and started wagging his tail at the mention of his name.

As the evening dawned, three of them started for Dussehra ground. Dipu and Meetu enjoyed chaat, samosas and ice cream without any inhibition. When the effigies of Ravan, Meghnaad and Kumbhkaran went up in flames and the surroundings echoed with the blasts of firecrackers, Dipu and Meetu also enjoyed the spectacle and clapped in joy.

They were quite happy and were discussing the fun they had that evening. When their mother asked them for having their dinner they politely declined citing some excuse.

But as they went to bed, they felt unbearable pain in their stomach. They started rolling around writing in agony.

When their mother asked them they tried to avoid at first but finally they had to admit that entire incident of the evening. They told her that they had enjoyed chaat and samosas sold at stalls in the fair.

Their mother immediately called the doctor.

When doctor examined them, he told them that they were suffering from food poisoning due to unhygienic food stuff consumed by them which was stored in the open by the vendors without any protection from dust and flies.

Their mother advised them to abstain from such activities in future. “Just imagine anything could have happened in such crowd. You are so young and innocent, you could have got lost. And see what you have done to yourself.”

“Sorry mom, now we realize our mistake and we will not repeat it ever again”. And then they never ever hid anything from their mother.