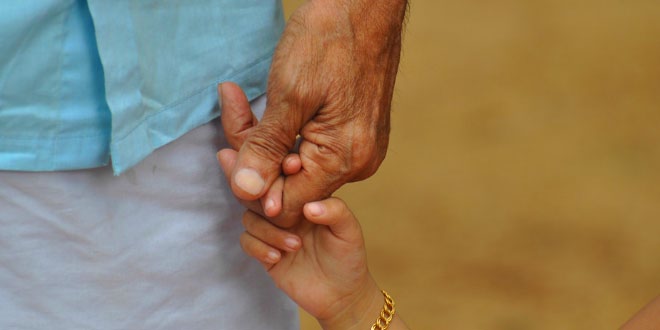 Two days later when Swaroop came to pick up Nikhil from the crèche he told him, “There is a surprise in store for you at home.”

When they reached home and the door opened, Nikhil found his Baba standing there, arms outstretched. Nikhil couldn’t believe his eyes. With a yell he jumped straight into Baba’s arms and hugged him tightly.

Around six months later one day Gautam and Nikhil went to the market. As Gautam was buying medicines Nikhil saw Dr. Nayak.

“Doctor Uncle,” he shouted running towards him. He caught hold of his hand and dragged him towards his grandfather.

“Doctor Uncle this is my Baba. And Baba this is the Doctor Uncle I was telling you about. He gave me that set of Panchatantra stories I was showing you yesterday.

“Mr. Mehrotra, it is really nice meeting you,” Dr.Nayak said shaking hands with Gautam. “You know, I am really glad that you changed your mind and decided to come back and stay with your son.”

“Changed my mind? I couldn’t quite get you Dr. Nayak.”

“Your son told me that you had shifted to ‘Home and Hope’ because of some personal problems. I had asked him to persuade you to come back, since Nikhil was missing you a lot. And see how right I was. After your homecoming he has shown tremendous improvement. Your son was telling me that Nikhil is doing much better in school.”

Gautam kept silent. Later as they were walking back, he kept thinking about the Doctor’s words. ‘So Swaroop had told the Doctor that he, Gautam, had left home, while the truth was that he had been driven out. Moreover, Swaroop hadn’t told him a word about Dr. Nayak’s advice. He had simply said everyone at home, most of all Nikhil, was missing him, and would he please come back. Gautam had believed him and had been quite happy to return. Only now, after meeting the Doctor, he had realised that his son had lied to him. Swaroop’s request was not because of a change of heart but because of the Doctor’s advice. Anyway, there was nothing he could do about it. He had to continue staying with his son because of Nikhil. For his grandson’s sake Gautam was willing to make every kind of adjustment.