Glory Of The National Flag: Minu, who studied in class 6th carrying her school bag on her back, entered with a long face in her house.

Seeing her pale face, her mother asked – “What happened?”

Minu replied in a low voice – “Tomorrow is Tanisha’s Birthday and she has invited me on her birthday party.”

Glory Of The National Flag: Story by Manjari Shukla

Her mother smiled and said – “Then you must be cheerful and happy, because tomorrow is 15th August too.”

Minu said – “But we are very poor and so can not purchase any gift for her.”

Her mother thought for a while, went into another room and brought a national flag in her hand.

Minu asked surprisingly – “But will she like national flag as a gift.”

Her mother had a wide grin on her face, and said happily – “You just give her and see.”

Next day after celebrating Independence Day in school, she went to Tanisha’s house.

Tanisha was looking like a Fairy in her white silk gown. She was surrounded with her friends and was accepting gifts with a wide grin.

Seeing big boxes wrapped in colored papers, Minu hesitantly moved towards her with her flag.

She said – “Happy Birthday” and gave her national flag.

Tania looked at national flag and kept it on the table in an ignored manner and did not look at Minu again.

Minu’s eyes were full of tears and her throat was almost choked. She went and stood in the corner.

Then children started birthday games and they were laughing and giggling loudly but only Minu was standing in a corner with tearful eyes.

Everybody was enjoying the party and no one paid attention towards Minu except Tanisha’s father.

When the games were over, Tanisha cut her magnificent cake which was beautifully decorated with 11 candles.

Everyone clapped and sang birthday song and had delicious cake.

Tanisha’s father kissed gently on Tanisha’s forehead and asked – “Why are you avoiding Tanisha and not talking with her.”

Tanisha shrugged her shoulders and replied – “My all friends have given me expensive and beautiful gifts except Minu. She has given me a flag which costs only 1 rupee.”

His father, who was a military officer did not like her reply, but he remained quiet.

After thinking something, he said loudly – “I like to gather all children in a circle and tell a story.”

All children including Minu rushed towards him.

He said – “Have you hoisted national flag in school and sang national anthem standing before it.”

Just then Tanisha asked – “But Papa, what is the significance of the flag and these colors.”

Suddenly Rima jumped and came forward and asked – “Uncle, and what does this charka mean?”

Tanisha’s father smiled and replied – “The flag of India was adopted on July the 22nd in 1947. It is a tricolor standard, with bands of saffron, white and dark green. The saffron represents courage, sacrifice, patriotism, and renunciation. The green stands for faith, fertility and the land. The white are in the center, symbolizing the
hope for unity and peace. In the center of the white band is a blue wheel with 24 spokes. This is the Ashoka Chakra (or “Wheel of Law”). The Chakra represents the continuing progress of the nation and the importance of justice in life.”

It is the symbol of our national pride, and then he turned towards Tanisha with wet eyes and said – “When I will fight for the country, I will either come back after raising the Indian flag in victory or return wrapped in it.”

Tears started rolling down from her eyes and she ran towards Minu and said – “Your gift is sacred and priceless. Please forgive me for my rude behaviour.”

Minu wiped her tears and hugged her.

All children including Tanisha’s father were smiling with tears of joy.

~ ‘Glory Of The National Flag‘ story by ‘Dr. Manjari Shukla‘ 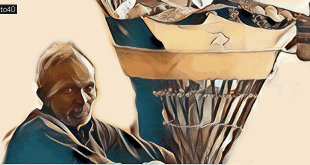