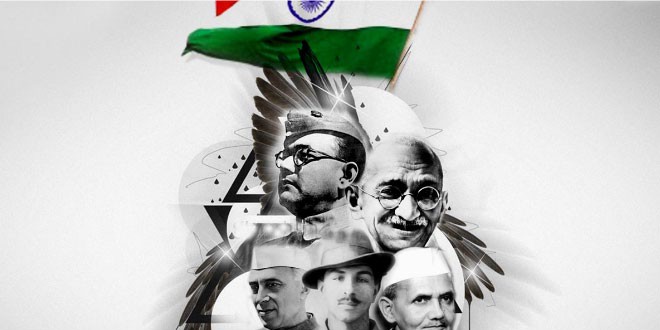 15 August — The midnight of August 15, 1947 is memorable for every Indian on earth, as it is the time, when India gained independence from the stranglehold of the mighty British. The otherwise suppressed tricolor flag of India was given its due respect, when it was hoisted in the midnight on the Independence Day. Since then, the red-letter day is celebrated with pomp and gaiety, across the length and breadth of India. Cultural programs and flag-hoisting ceremonies are the predominant affair of the day, while colorful kites fill the sky in the evening, to symbolize freedom. People indulge themselves in remembering the heroes of the freedom struggle and pay homage to them. 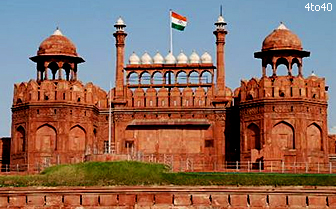 In all the schools and colleges across India, no academic work is done on Independence Day, but all the students and staff members would be present in their respective educational institutions, to celebrate the day. A sort of social gathering is arranged in the educations institutions, wherein cultural programs are organized. Flag hoisting ceremony takes place within their respective premises. As the flag is hoisted by the head of the institution (mostly the principal), students sing national anthem and pay respect to their flag and to uphold the sovereignty of the country.

Students and teachers celebrate the day at their respective educational institutions, while others back home spend the day either by going for an outing or watching special programs on television. Majority of the people tune in to Doordarshan in the morning, to watch the live telecast of Prime Minister’s speech at the Red Fort in Delhi, as it is the major highlight of the Independence Day of India. Prime Minister’s speech and patriotic songs and documentaries showing excerpts from the freedom struggle are aired on the national channels, while the private television channels make it a point that their viewers are amused all through the day. Hence, they telecast cultural programs, movies related to independence, apart from the patriotic songs that regenerate the hidden patriotism in people.

Shops across India are strictly directed to keep their shutters down on Independence Day, while you can still spot the groceries and small stores opening up late in the evening. All government offices remain closed on August 15. India Gate is the center of attraction and a nice place to hang out in the evening of Independence Day, as the structure is attractively illuminated. The sky in filled with kites of various shapes and colors. As a whole, it can be said that Independence Day is a holiday much awaited by people in India, every year.

Before the 18th century, India’s relationship with the West had been predominantly trade-related. All this changed, when the forces of the East India Company defeated Siraj-ud-Daulah, the Nawab of Calcutta. That signaled the arrival of the British as rulers. Until the Sepoy Mutiny of 1857, the East India Company, with the Governor General as its head, ruled the subcontinent. After that, the Crown took over the administration, with the Viceroy served as its representative.

In the 20th century, the country witnessed the rise of many leaders such as Gopal Krishna Gokhale, Jawaharlal Nehru and Sardar Vallabhbhai Patel. Banded under the leadership of Mahatma Gandhi and his doctrine of non-violence, the freedom struggle moved ahead with new vigor. Milestones like the Quit India Movement, Non-Cooperation Movement, Khilafat Movement and Gandhi’s Dandi March brought the inevitable freedom closer.

At the stroke of midnight, as India moved into August 15, 1947, India’s first Prime Minister, Jawaharlal Nehru, read out the decisive speech, proclaiming India’s independence from the British Empire. The moment ended three centuries of British rule over India. The land was no longer the summer retreat of British sahibs, who sneaked into the nation to fancy spices, shikar, elephants and snake-charmers, and ultimately ended up getting a stranglehold over the nation and torturing the natives in every possible way. Independence Day remained the sole national festival until India declared itself a republic in 1950.

Independence was also the end of nearly a century of struggle for freedom, battles, betrayals and sacrifices. It also created a situation, where we were responsible for ourselves. However, it wasn’t a period of unqualified joy. For many people, in spite of a new era promised by independence, partition between India and Pakistan was a painful reality and so was the bloodshed that accompanied it. That was six decades ago.

Much has changed over the years – today the freedom struggle finds its place in history books and memoirs, and on the tombstones of valiant martyrs. Politics has undergone a personality change from fiery idealism to a pragmatic cynicism. Karma drives the nation on its way forward, and population has crossed the billion mark. Nonetheless, come August 15 and you will find the people forgetting the drudgery of everyday life for a while, and coming together to pay homage to the brave heroes of the freedom struggle and standing up for the National Anthem.

Along with the soaring cadences of the anthem, the hopes and dreams for a better tomorrow are renewed in political speeches and replays of the deeds of those, who earned us our freedom. Independence Day is an occasion to rejoice in our freedom and to pay collective homage to all those people, who sacrificed their lives to the cause. The day also marks the coming together of the states into one nation – India. This was probably our biggest diplomatic success. 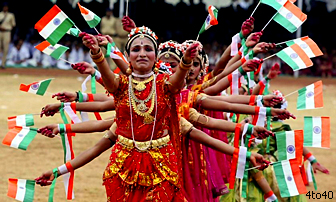 Schools and colleges mark the celebrations of Independence Day with cultural activities, drills, flag hoisting and distribution of sweets. A number of Government as well as private organizations celebrate it in the similar manner, although most of them remain closed for the entire day. Families and friends get together for lunch or dinner, or go for an outing. Housing colonies, cultural centers, clubs and societies hold entertainment programs and competitions, usually based on the freedom theme.

The Prime Minister of India sets the mood for Independence Day, by hoisting the national flag and addressing the nation from the Red Fort, the historical monument in Delhi, in the morning of the day. This is followed by a march-past of the armed and police forces. The Prime Minister’s address and the march-past following it are relayed live on national television of India – Doordarshan. Similar ceremonies are held in all the state capitals as well. Many schools organize march-past and call upon prominent politicians of their respective constituencies, to witness the event.

In the Indian cities, one could see a sudden burst of saffron, green and white colors, which represent the Indian tri-color. The media, especially private radio channels, go to town with a variety of contests, promotions and programs related to Indian independence. Television channels show patriotic movies and relentlessly play patriotic songs from old and new movies. Billboards on roadsides for different brands pay their tribute to the nation. The sky wears a bright spectrum of colors, when beautiful kites of various shapes, sizes and color are flown in the evening of Independence Day.

Everyone seems to have something going for him or her. Shops sell a range of Independence Day merchandise such as flags, stickers, tee-shirts and greeting cards. People hawk paper and plastic flags and tri-colored balloons to motorists at traffic signals. Although the day is an amalgamation of the trifle of commercialization and jingoism, what lies beneath all the colorful celebrations is the national spirit of gaiety, pride and hope for a better future. A spirit and hope that is renewed every year by Indians, on August 15.