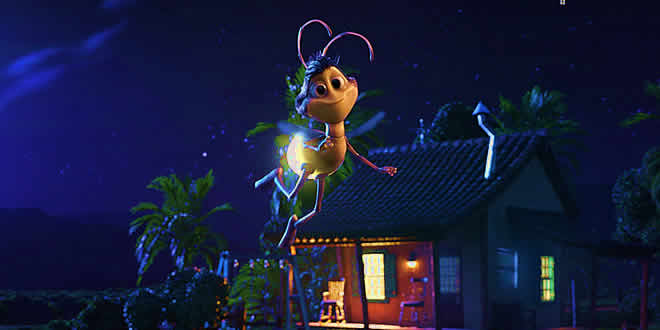 A little boy called Dhon lived in a hut with his mother, in a small village in Assam. Every evening Dhon’s mother went to a nearby jungle to fetch firewood. When she was away, Dhon would play in the garden. Everyday, before leaving, she would tell Dhon, “I am going to bring firewood, son. Do not go out. Play near the hut.”

“Mama, may I go a little way in the woods to pick blackberries?” he asked one day. “All right”, his mother said, “but do not go very far.” So Dhon went to the woods that day. He was happy to hear the birds chirping on the trees. He ate lots of blackberries. He stuffed some in his pockets. He also gathered some in his handkerchief.

Then Dhon tried to catch some beautiful butterflies. He chased them far into the woods. He ran and he jumped. He forget he had to go back home. After some time, he felt tired and sleepy. He wanted to go home. But he could not find his way back. He did not know what to do. He sat under a tree and cried.

Suddenly, he saw a speck of light twinkling among the trees. He stopped crying and looked as it. Slowly, the spot of light came nearer and nearer till it was right on Dhon’s hand.

Dhon looked at it in wonder. Then he heard a voice. “I am a firefly. Why are you crying, little boy?” “I have lost my way. I want to go home to my mother,” replied Dhon. “Don’t cry, little boy, I will take you home. Follow me. But you must promise never to catch me.”

Dhon promised and followed the firefly through the trees. Soon he reached home and was safe in his mother’s arms. He thanked the firefly. “You have been so nice to me, firefly. I shall never forget you.”

“You have also been nice to me,” said the firefly. “You kept your promise and did not hurt me. I shall come with my friends to your village every night.”

The firefly then went back to the woods. But it still comes to meet its friend in the village every night. That is why there are so many fireflies twinkling like little stars in the village huts in Assam.