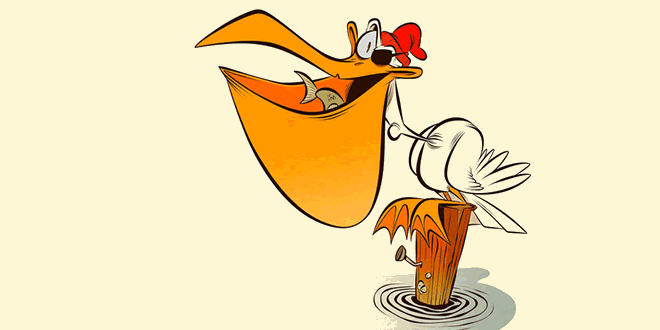 A Date With A Pelican: Animal Stories for Kids

Cheeku was on cloud nine when his editor Mr. Bolu Bear asked him to get ready for an assignment on birds inhabiting North America.

Cheeku worked as a Special Correspondent with the Jungle Times. This was his first trip to North America. 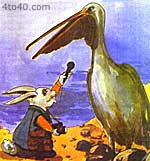 Having packed his bag and baggage, he flew off to the place.

While strolling beside a lake, he saw a huge bird of unusual size. Unable to suppress his curiosity, Cheeku went to him.

Cheeku noticed that the huge bird was distinguished by a large, elastic throat pouch. He at once decided to interview the bird for his paper, Jungle Times.

“But let me first know its name at least,” thought he and asked the bird its name.

“I am Pelican,” the bird opened its long beak.

“Let me introduce myself. I have come from India. My name is Cheeku, and I work as a reporter with the Jungle Times.

“Yes, of course, I know about you. I have read the interviews taken by you in the newspaper.”

“Ok, then, tell me something about your huge body,” Cheeku proceeded with his interview.

“You see, we are among the biggest birds of the world. Normally, our length is 180 cm and we weigh almost 13 kg. But we do vary in size according to species.

“Some Pelicans are small and their length ranges between 107-130 cm. They are called Brown Pelicans.

“During the period when Americans started using insecticides, our number had dwindled considerably. But after a ban on it, there has been a remarkable improvement in our number.”

“How many species do you have?”

“What do you eat? Just tell me the variety of food you take.” Cheeku wondered what this huge bird would be eating to fill its stomach.

Just then Cheeku saw a fish leap up in the water. The Pelican also noticed it.

It instantly plunged its mouth into the water and trapped the fish in its extensible throat pouch as if it were a dip-net. Then it swallowed the whole fish immediately.

“Excuse me, I could not resist the temptation to eat fish the moment I saw one.”

“What did you ask? Yes, you see, our favorite food is fish. You have yourself seen how we catch it.”

“Oh, so you store the fish in the pouch hanging just below your throat?”

“No, Cheeku Brother, we use it as a dip-net. The fish are trapped in it and we swallow them at once.”

“Where do you live?” Cheeku grew more interested in the Pelican.

“We are water birds so we inhabit lakes, rivers and sea coasts.”

“How many eggs do you lay at one point of time? What is the colour of your eggs? Do you build any nests to hatch the eggs?” Cheeku fired a number of questions at one go.

“Arey, so many questions? But I can only reply one by one,” said the Pelican smiling.

“Our eggs are bluish-white. We lay one to four eggs at a time. The eggs are hatched in about a month. The young ones mature at 3 to 4 years.”

“And what about your nests?”

“Yes, during breeding season we build small nests on islands and lay eggs.”

Pelican had become tired. He had also begun to feel hungry.

But Cheeku was in no mood to let him go. He wanted to ask him so many questions. “But you have not told me about your flight,” he said.

“Yes, the way we soar upwards in the sky is worth seeing, we usually travel in small flocks, and look very impressive.”

“How can one distinguish between a male and a female Pelican?” Cheeku put forth his last question.

“Though looks-wise, we appear similar, but the male Pelican is bigger in size,” replied the Pelican. He seemed to be through with Cheeku’s questions.

Cheeku had also finished his stock of questions. He thanked the Pelican and returned to his hotel to pen down the interview.