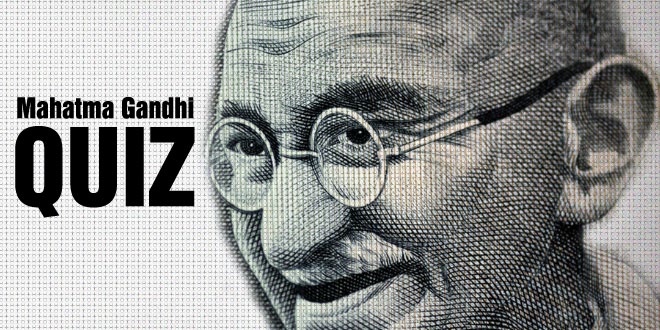 Mahatma Gandhi Quiz For Students And Children: Mahatma Gandhi‘s reputation as the Indian spiritual and political leader who coordinated and led a successful national struggle for independence against British imperial rule on the strength of a non-violent movement survives largely intact. The legend of Mahatma Gandhi has it that he returned to India from South Africa in 1915, took control of and radically transformed the Indian nationalist movement, and led three great popular movements that eventually wore down the British government and led to Indian independence.
Get Started!

Mahatma Gandhi is called as Mahatma because of his great works and greatness all through the life. He was a great freedom fighter and non-violent activist who always followed non-violence all though his life while leading India for the independence from British rule. He was born on 2nd of October in 1869 at Porbandar in Gujarat, India. He was just 18 years old while studying law in the England. Later he went to British colony of South Africa to practice his law where he got differentiated from the light skin people because of being a dark skin person. That’s why he decided to became a political activist in order to do so some positive changes in such unfair laws. Later he returned to India and started a powerful and non-violent movement to make India an independent country. He is the one who led the Salt March (Namak Satyagrah or Salt Satyagrah or Dandi March) in 1930. He inspired lots of Indians to work against British rule for their own independence.