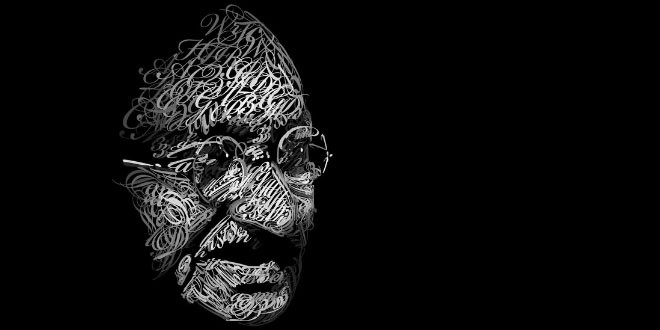 On his return to India in 1916, Gandhi developed his practice of non-violent civic disobedience still further, raising awareness of oppressive practices in Bihar, in 1918, which saw the local populace oppressed by their largely British masters. He also encouraged oppressed villagers to improve their own circumstances, leading peaceful strikes and protests. His fame spread, and he became widely referred to as ‘Mahatma‘ or ‘Great Soul’.

As his fame spread, so his political influence increased: by 1921 he was leading the Indian National Congress, and reorganizing the party’s constitution around the principle of ‘Swaraj’, or complete political independence from the British. He also instigated a boycott of British goods and institutions, and his encouragement of mass civil disobedience led to his arrest, on 10th March 1922, and trial on sedition charges, for which he served 2 years, of a 6-year prison sentence.

Beloved Bapu: Inspiring Poetry On Father Of The Nation Gandhiji

He, the saint of Peace and Nonviolence,
Taught the world at large;
That hatred and violence
Bring nothing else but curse,

“Rise, awake and shake off the slavery”
He called his countrymen, far and near,
And lo! The mighty empire shook
To quit India for ever.

“God is Truth and Truth is God”
What he preached and believed –
That human race is one –
Without any cast and creed,

He, the Father of the Nation, uplifted
All “son of God” from woe,
Himself worked and set examples,
So that oppression must go

His love, piety and kindness,
Conquered the heart of people.
Without any wealth and kingdom,
He was the King of one and all.

Evil bullet pierced his body,
But not his immortal soul.
Let us bow and take pledge –
his ideals will always be our goal.