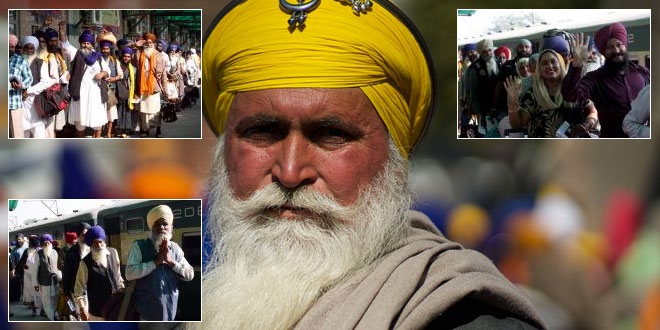 Over 2,000 Sikh pilgrims from India arrived at Gurdwara Nankana Sahib in Pakistan’s Punjab province to mark the 550th birth anniversary of Sikhism founder Guru Nanak Dev, ahead of the opening of the landmark Kartarpur Corridor.

Over 2,000 Sikh pilgrims from India arrived at Gurdwara Nankana Sahib in Pakistan’s Punjab province to mark the 550th birth anniversary of Sikhism founder Guru Nanak Dev, ahead of the opening of the landmark Kartarpur Corridor, which is scheduled to take place this week.

The Gurdwara Janamasthan Nankana Sahib was built at the site where the Guru Nanak Dev was born. The year 2019 marks the 550th birth anniversary year of the Sikhism founder.

Some 2,200 Indian Sikh pilgrims arrived in Punjab province via Wagah border and they were received by senior officials of the Evacuee Trust Property Board (ETPB), a spokesperson of ETPB told PTI.

After their arrival the Sikh pilgrims left for Gurdwara Janamasthan Nanakana Sahib, the spokesperson said.

During their stay, they will also visit other Gurdwaras in the Punjab province and attend the opening ceremony of the Kartarpur Corridor on November 9 and take part in the main function in connection with the birth anniversary of Guru Nanak Dev on November 12. They will leave for their homeland on November 14, he said.

Talking to reporters, the group leader Gurmeet Singh said that they have brought a message of love and peace. He said Pakistan Prime Minister Imran Khan’s decision to open the Kartarpur Corridor for Sikhs will be remembered for a long time.

“We are very happy to come here,” Gurmeet Singh said.

Amir Ahmed, ETPB chairman, said the Sikh pilgrims will be fully facilitated and fool-proof security will be provided to them.

Earlier, most of the first batch of 1,100 Indian Sikh pilgrims who crossed over here from Wagah on October 31 to attend the celebrations visited the Kartarpur Sahib along with Punjab Governor Chaudhry Sarwar and installed the gold palki they brought with them at the Gurdwara Darbar Sahib.

Speaking on the occasion, the governor said Pakistan had completed Kartarpur Corridor project within the stipulated time.

The governor said Gurdwara Darbar Sahib was a gift from Pakistan to the Sikh community around the world.

With this, some 5,000 Sikh pilgrims from India will visit daily after the inauguration of the corridor by Pakistan Prime Minister Imran Khan, he said and added that the Kartarpur project will also help bring both countries closer.

Meanwhile, the Pakistan government has decided to make it mandatory for the tour operators to have NoC (no objection certificate) to take foreign Sikhs (other than Indians) to their holy places especially Kartarpur Sahib.

“The Sikhs coming from the US, Canada and the European countries have been issued visit visa for Lahore. There are security problems with their uncoordinated visits to their holy places. That is why the tour operators have been asked to take NoC to the travel of foreign Sikhs here,” an official said.

The Tourism Development Corporation of Punjab government has also opened a motel in Nankana Sahib for the pilgrims.

According to the TDCP, the motel has 19 rooms with all required facilities. Sikh pilgrims have started coming at the Nankana Sahib from India and other countries in connection with the 550th birth anniversary of Baba Guru Nanak celebrations.

The Kartarpur Corridor will connect the Dera Baba Nanak shrine in India‘s Punjab with Darbar Sahib at Kartarpur, just 4 kilometers from the International Border, located at Narowal district of Pakistan’s Punjab province.

Meanwhile, in Peshawar, the Sikh community celebrated the upcoming opening of the Kartarpur Corridor.

The function was held on Monday at Gurdwara Bhai Joga Singh at Mohalla Jogan Shah, Aasia Gate in Peshawar where provincial information minister Shaukat Yousafzai was the chief guest.

There is complete peace and religious freedom in Pakistan and tourists could visit any religious site fearlessly, Yousafzai said while addressing the function arranged by the Peshawar Sikh Community.