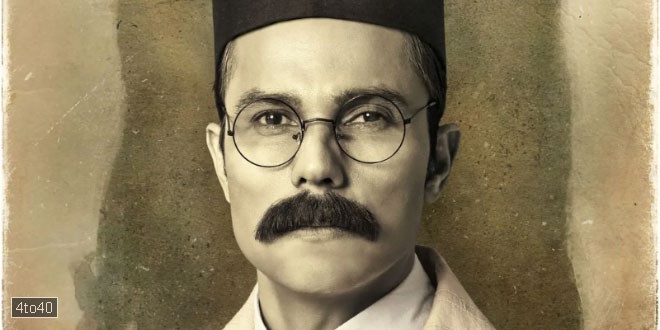 The makers of the upcoming film Swatantra Veer Savarkar have released the first look of actor Randeep Hooda as the Indian freedom fighter Vinayak Damodar Savarkar on his 139th birth anniversary.

The actor shared the 0.30-minute motion poster on his Twitter handle on May 28 with a caption, “A salute to one of the tallest unsung heroes of India’s struggle for freedom & self-actualization. hope I can live up to the challenge of filling such big shoes of a true revolutionary & tell his real story which had been brushed under the carpet for so long #VeerSavarkarJayanti.”

Randeep Hooda will be seen playing the titular role in Mahesh Manjrekar’s upcoming directorial Swatantra Veer Savarkar, which is based on the life of the freedom fighter Veer Savarkar, who was also a social reformer, writer, poet, historian, political leader, and philosopher.

A salute to one of the tallest unsung heroes of India’s struggle for freedom & self-actualisation. hope I can live up to the challenge of filling such big shoes of a true revolutionary & tell his real story which had been brushed under the carpet for so long#VeerSavarkarJayanti pic.twitter.com/EaiDWQyeLZ

The movie starring actor Randeep Hooda in the title role is directed by Bollywood’s acclaimed director-producer Mahesh Manjrekar. The movie is produced by Anand Pandit and Sandeep Singh and co-produced by Roopa Pandit and Sam Khan.

It may be recalled that Randeep Hooda had taken to his Instagram handle on the occasion of Shaheed Diwas last month to announce that he will portray Veer Savarkar in Mahesh Manjrekar’s upcoming directorial Swatantra Veer Savarkar. “Kuch kahaniyaan batayi jaati hai aur kuch jee jaati hain (Some stories are to be made and some stories are to be lived)! Grateful, excited, and honoured to be part of #SwatantraVeerSavarkar‘s biopic”, the actor had written.

Randeep Hooda talking to the Indian Express had then called the title role challenging and said that he was happy to be able to showcase Veer Savarkar’s life story. “There are many heroes that have played their part in getting us our independence. However, not everyone has got their due. Vinayak Damodar Savarkar is the most misunderstood, debated, and influential of these unsung heroes and his story must be told.”, he was quoted. Director Mahesh Manjrekar meanwhile said that this was the right time to tell stories from our history that have remained ignored to date.

It is important to note that history has never been kind to Veer Savarkar. Through a concerted attempt, Savarkar was constantly made an object of scorn and contempt by successive governments after India attained freedom in 1947. He was also falsely implicated in the murder of MK Gandhi but was later exonerated for the lack of evidence against him.