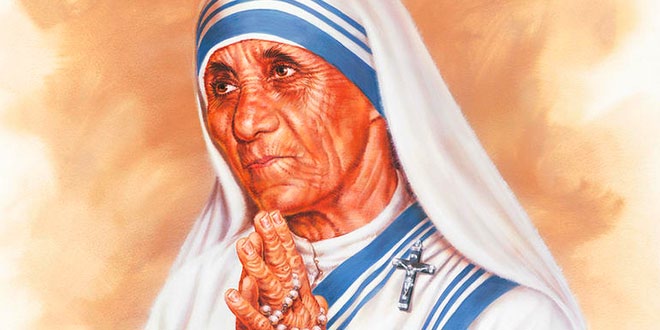 Who was Mother Teresa?

Mother Teresa was born in Skopje, Yugoslavia (which is now Macedonia) in 1910 and died on September 5, 1997. Her parents were Nikola and Dronda Bojaxhiu. They named her Agnes Gonxha Bojaxhiu, but she changed her name to Teresa on May 24, 1931.

Mother Teresa taught geography at St. Mary’s School in Calcutta, India from 1929 to 1948. When she was riding a train to Darjeeling though, she heard God call. Soon she wanted to help the sick, the poor, and the dying. She took her final vows and became a Roman Catholic nun in 1937. She started to work in the Missionaries of Charity. Her first day on the job, Mother Teresa picked up a dying woman who was half-eaten by ants. Mother Teresa took the woman to Dhardnshala. She tried to clean the woman, but her skin came off and the woman died.

In 1952 Mother Teresa started the Kalighat Home for the Dying. She and other nuns searched for people who were sick or dying on the streets in Calcutta, India. They helped and cared for them at the home. Once Mother Teresa said, “I see God in every human being.” She became known as “The Saint Of the Gutters.” Also, in the later 1950’s, she began a leper colony called the “Town of Peace.”

Later, every one of her centers were placed under an organization called the Missionaries of Charity. The centers helped to treat blind people, lepers, the dying, the disabled, and the old. Mother Teresa also started orphanages and schools for the poor. By 1990, there were centers in 25 countries.

Mother Teresa won the Nobel Peace Prize in 1979, the Jawaharlal Nehru Award for International Understanding in 1972, the Magsaysay Award in 1962, the Leo Tolstoy International Award, the First Pope John XXIII Peace Prize in 1971, the Padma Shri in 1963, and the Bharat Ratna in 1980. All of the money Mother Teresa got from her awards, she gave to the centers she set up.